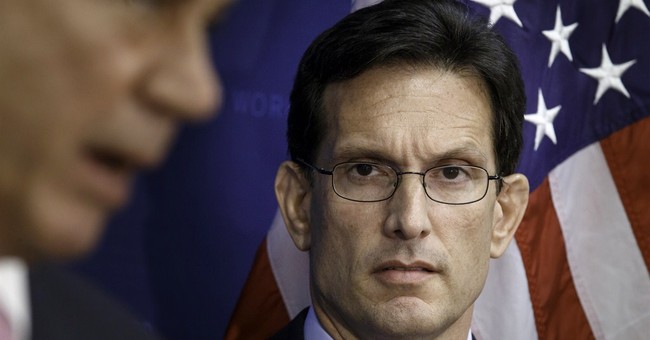 This is genuinely shocking:


Wasserman calls it the "biggest House upset" he's ever seen. Elections expert Sean Trende pronounces himself speechless. Team Cantor is likely as stunned as anyone else:

no they did not RT @deirdrewalshcnn: Cantor aides did not appear to be sweating this primary challenge at all earlier today


One recent poll showed a potential tightening of the race, but with Cantor still ahead by double digits. And yet...the sitting House Majority Leader got blown out in a race everyone expected him to win comfortably. Incidentally, it's not as if he totally ignored his primary race either:

Brat has exposed discontent with Cantor in the solidly Republican, suburban Richmond 7th Congressional District by attacking the lawmaker on his votes to raise the debt ceiling and end the government shutdown, as well as his support for some immigration reforms. At a May meeting of Republican activists in the district, Cantor was booed, and an ally he campaigned for was ousted as the local party chairman in favor of a tea party favorite.


I'll leave you with this link to, ahem, Republican nominee Dave Brat's website. Oh, and this:

The fact that no one seems to know whether or not there is a Democratic candidate in VA-07 isn't promising if there is one.


Safe seat. Probably. But as tonight shows, take nothing for granted.