Poll: Four Years After Passage, Obamacare As Unpopular as Ever 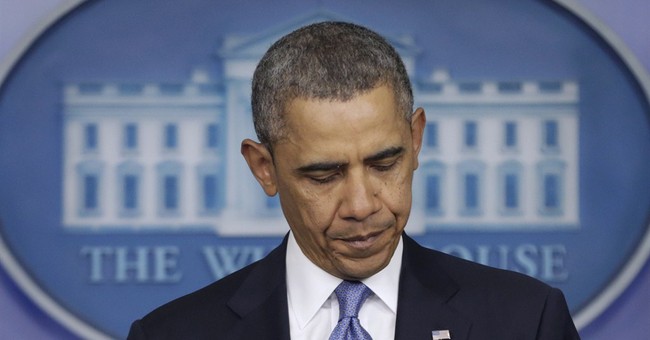 Four years ago today, chants of "yes we can!" echoed throughout the House chamber. A new dawn had broken in America. Tens of millions of uninsured Americans would finally have access to quality, affordable health coverage, healthcare spending would fall, healthcare-related deficits would contract, everyone pleased with their existing arrangement would be protected, and everyone's rates would drop. Some of us didn't buy any of it, but those who did -- or said they did -- cheered and partied the night away:

In spite of their now-infamous promises, the bill Democrats passed was unpopular with the American people at the time, and remains so to this day. Pew Research:

Other polling -- from CNN, Fox, Gallup, and Quinnipiac -- produces similar results. Pew goes out of its way to note that most opponents of the law want to see it fixed, though the way they ask that question is silly and misleading. Respondents were asked whether elected officials should work to make the law function "as well as possible," or to make it "fail." Unsurprisingly, relatively few Americans chose the latter option. When the public has been asked whether they'd prefer to keep the law intact or repeal and replace it, they opt for repeal. Majorities have also said they'd prefer to revert back to the pre-Obamacare system rather than to continue on the new law's path. According to Pew, the law is underwater among nearly all groups, including men (-18), women (-6), whites (-29), and independents (-22). Several key Democratic constituencies are split roughly evenly on the law: Hispanics are evenly divided (47/47) and young voters are barely supportive (50/47). All other age cohorts disapprove of the law. This survey contradicts recent polling on young people and Obamacare, much of which has shown fairly heavy disapproval. Significantly fewer Millennials have chosen to participate in Obamacare's exchanges than is necessary to produce reasonably stable risk pools. Meanwhile, Nancy Pelosi is still pretending that Obamacare will lower rates and help Democrats in 2014. Not only does the law face a persistent support deficit among the broader public, the intensity gap is wide. Based on Pew's numbers, just 26 percent of the public "strongly" backs Obamacare, whereas 41 percent have strong negative feelings. Turnout is the name of the game, especially in midterm elections, so that data point should scare Democrats. Here's how I summed up the state of their failing $2 trillion experiment earlier in the week:


I might have added that the CBO has also determined that the law is slowing hiring, impeding economic growth, and will be responsible for the US workforce losing the equivalent of 2.5 million full time workers over the next four years. I'll leave you with a montage put together by the Washington Free Beacon, highlighting Obamacare victims in all 50 states. As you watch this, bear in mind that Democrats promised there would be no losers under this law, and have tarred negatively-impacted Americans as liars and partisans: