Reporters, WH: No, Daily Briefing Questions Are Not Submitted in Advance 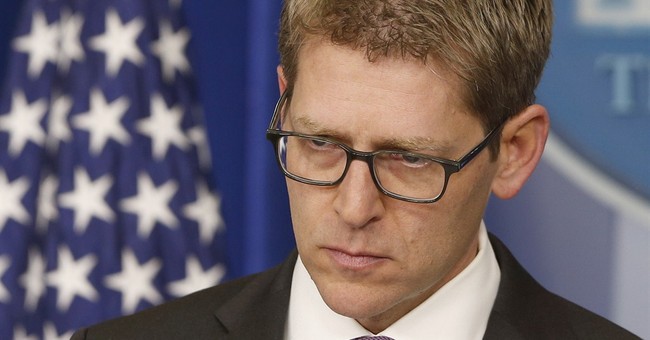 UPDATE - Anaya has released a statement* addressing this issue:

"It seems much had been inferred about my observations following my White House visit yesterday. First, I did not take notes during our coffee with Jay Carney because it was off the record. But when I referenced the meeting in my live reports I did say that it was a great opportunity to talk about the challenges of his day and how he has to be so well-versed on many topics each day. In my live report I also wanted to share my impression of my experience in getting a question answered during the briefing. I was indeed asked to provide my question in advance. Because my question was largely of local interest, I chose to save it for my interview with the President instead. My mistake was to lump that experience with my coffee meeting reference, inadvertently giving Mr. Carney credit for that when in fact it did not come from him. I regret giving anyone the impression that it was from conversation I had with Mr. Carney. I do not attend those briefings regularly and cannot speak directly to the process for non-visiting journalists. None of my observations stemmed from my off-the-record meeting with Jay Carney."


So Carney did not tell her that White House correspondents often turn questions over in advance, and she did not intend to speak to "non-visiting" journalists' routine or process. She did, however, affirm that she was

asked to provide her potential press briefing question in advance. I've sent a follow-up asking if her questions for the president were also pre-screened. *See update three.


UPDATE II - A producer at CBS 5 emails to say that they posted the wrong statement, and have taken it offline for now. Strange. More to come...


Critics of the current administration can cite, chapter and verse, Team Obama's numerous efforts to manipulate, control, bully, intimidate, and spy on the news media. This White House's lack of transparency and shabby treatment of the press has long been a source of criticism. So it's no wonder that an on-air statement from a local Arizona reporter is garnering some attention today. Catherine Anaya of CBS 5 reported that in advance of her (tightly monitored) four-minute interview with President Obama this week, she and other local journalists received a briefing from White House Press Secretary Jay Carney. She claimed that during their "off the record" discussion with Carney, he revealed that in many cases, correspondents submit their questions in advance of his daily exchange with journalists:

"He also mentioned that a lot of times, unless it's something breaking, the questions that the reporters actually ask -- or the correspondents -- they are provided to him in advance. So then he knows what he is going to be answering."


If true, this would represent a shocking form of collusion and censorship, and would deal a deep blow to journalistic integrity. It was such an outrageous allegation, in fact, that I immediately expressed my doubts about it. Sure enough, Fox News' chief White House Correspondent Ed Henry is adamantly denying Anaya's account, as is Carney:

@TPLRRT1 @guypbenson absurd -- i don't submit Q's to @PressSec b4 briefing & not aware of anyone doing that. Local anchor needs to correct

.@RalstonReports Briefings would be a lot easier if this were true! Rest assured, it is not.

I've reached out to the Arizona reporter via email and Twitter, seeking a clarification on her comments -- although I'm most interested in her answer to this question:

@CatherineAnaya Follow-up: Were *you* asked to submit questions in advance of your 4 minute interview w/ POTUS? Thank you.


If I hear back from Ms. Anaya, I will update this post with her response. There are still enough self-respecting journalists in the White House press corps for the "questions in advance" scheme to be far-fetched. But that doesn't mean that the group doesn't fall down on the job with depressing regularity.