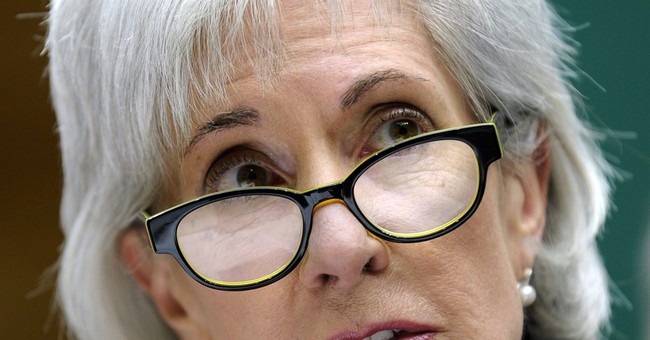 Suck it up, America. Cancel your cable subscription for the year, eat Ramen Noodles for a few weeks, and you'll be fine:


Premiums will rise in 2015 under ObamaCare, Health and Human Services Secretary Kathleen Sebelius said on Wednesday. “I think premiums are likely to go up, but go up at a smaller pace than what we’ve seen since 2010,” Sebelius said in response to a question from Rep. Erik Paulsen (R-Minn.). “The increases are far less significant than what they were prior to the Affordable Care Act,” she said during testimony to the House Ways and Means Committee. Average healthcare premiums for most consumers have been rising steadily for more than a decade, though the trend has slowed in recent years.


A few points: (1) We weren't promised that premiums would still continue to increase, but more slowly. We were promised that our rates would go down. By a substantial amount, too. Nancy Pelosi and friends said "everybody will have lower rates." Sebelius following up with, "actually, your rates will go up, but..." isn't going to cut it. (2) This White House continues to pretend that the recent slow down in rising healthcare costs is attributable to Obamacare. The government's own number crunchers have concluded that's not the case. During her testimony, Sebelius also repeated the claim that the administration has no way of knowing how many "enrollees" have paid their first premium -- which is a prerequisite for obtaining coverage:

HHS does not know how many of the people who signed up for Obamacare have followed through and paid their premiums, Secretary Kathleen Sebelius told a House panel this morning. “I can’t tell you because I don’t know that,” Sebelius told Rep. Tom Price at a Ways and Means Committee hearing on the agency’s budget. She said the agency receives “aggregate data” from insurers about people who have paid premiums and are eligible for tax credits — HHS pays those subsidies to insurers — but not detailed enough information to answer Price’s question about a specific number.


Yet HHS has no problem announcing that 4.2 million Americans "signed up" for Obamacare through March 1. Based on expert estimates of nonpayment rates, the correct number is probably closer to 3.4 million, and the overwhelming majority of those people already had insurance prior to Obamacare. I'll leave you with the stories of some additional Obamacare "liars" whom Harry Reid and company will need to destroy: