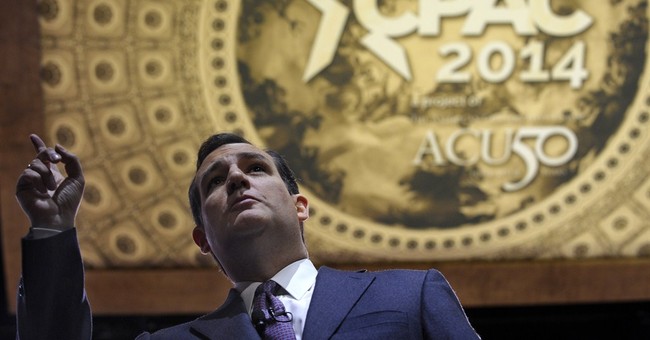 Thursday was a banner day for observers of the (very) early 2016 GOP horserace at CPAC, as six rumored presidential candidates addressed attendees. Below is video and brief commentary about each speech, in order of appearance: (1) Sen. Ted Cruz - Whether it was a scheduling necessity of a deliberate strategy, the decision to have Cruz kick off the festivities was savvy. The (occasionally late-arriving) CPAC crowd queued up early and jockeyed for position to see the junior Senator from Texas, who was a big draw. The off-the-cuff ten point conservative plan Cruz outlined was jam-packed with red meat and energized the audience:

(2) Rep. Paul Ryan - The 2012 Republican Vice Presidential nominee focused his remarks on the work Republicans in Congress are doing to advance a "modern, pro-growth, principled" conservative agenda on behalf of the American people. He said he welcomed intra-party disagreements, casting them as "creative tension" rather than media-fueled "civil war." He said that most of these battles flare up over tactical moves, not principles, and should be kept in perspective. Also, perhaps I'm biased, but I thought his introduction was excellent:


(3) Amb. John Bolton - He's not necessarily a presidential A-lister, but he's openly discussing throwing his hat into the ring, and his passion for a muscular American foreign policy was on full display in his remarks. He lambasted the Obama administration's handling of international events from eastern Europe, to the Middle East, to China, to South America, to Northern Africa. His critiques were especially biting on Obama's Libya policy, which he called "the paradigm" of Obama's failings:

(4) Gov. Chris Christie - The New Jersey Governor was greeted with a generous, but not raucous, standing ovation by the audience, which seemed to warm to his message as he progressed through his energetic speech. Christie underscored his conservative credentials -- including beating Big Labor to achieve landmark pension reform -- and noted that deep blue New Jersey has now re-elected its first pro-life governor since Roe v. Wade was decided in 1973. He beat up on Beltway dysfunction, crowed about the conservative achievements of Republican governors around the country (don't forget, he's RGA chairman), ripped Democrats' misplaced obsession with income inequality, and warned that Republicans must convince voters of what they're for, not just what they're against. And in a pointed reminder about the realities of electoral politics, Christie said, "we don't get to govern if we don't win:"

(5) Gov. Bobby Jindal - Louisiana's chief executive focused most of his remarks on the important issues of education reform and religious freedom, peppering his address with a number of anti-Obama zingers that for some reason fell flat in the room. Jindal is a keen intellect and a strong manager, but I've yet to see him really electrify a room. He performed well today, but there was a palpable lull in enthusiasm inside the ballroom between Christie and Rubio. If Jindal wants to be a contender at the next level, overcoming this stylistic shortcoming -- the exact nature of which is tough to pin down -- needs to be a priority. He's long on substance, which is a real asset:


(6) Sen. Marco Rubio - At last year's CPAC gathering, Rubio spoke back-to-back with Sen. Rand Paul and seemed to be overshadowed by his colleague from Kentucky. The Florida Senator struck me as strangely unfocused and off his game. This year, on the heels of a well-received and impassioned floor speech on Cuba and Venezuela last week, Rubio broke through with a truly excellent message. He attacked 'big government' economics, scolding Democrats for intentionally dividing America rather than fostering growth and opportunity. He also built a stirring case for a strong America in the international arena, defending the United States as the world's indispensable nation. He closed with a moving tribute to his father and the American dream, appearing to fight back tears as he recalled his dad's last days. Some conservatives will never forgive him for his 'Gang of Eight' gambit (immigration went unmentioned in his comments), but Rubio once again showed why he's a force to be reckoned with. This may have been the best speech of the day:


Beyond the 2016 buzz, three GOP Senators also delivered memorable speeches: Mike Lee of Utah spoke about the positive, proactive agenda he's seeking to help build within the party -- admonishing conservatives to stop talking about Ronald Reagan, and start acting like him. Pat Toomey of Pennsylvania recounted the blow Harry Reid and the White House suffered in the Senate yesterday, when President Obama's radical DOJ nominee was defeated. And Tim Scott of South Carolina spoke compellingly about his journey from being a failing high school freshman to a United States Senator.