Obama: No Corruption, No Political Motivations in IRS Scandal 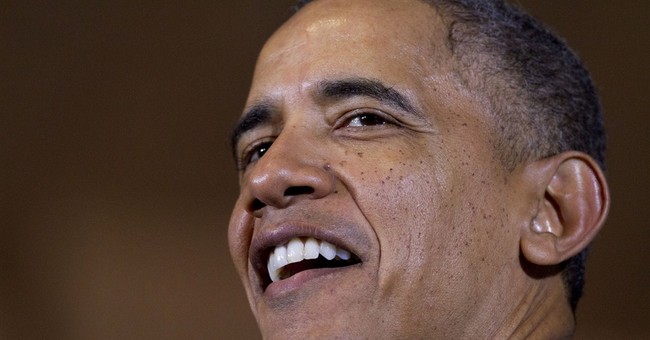 If you ask Barack Obama, the various scandals that have plagued his presidency are Fox News' fault. During his chat with Bill O'Reilly before the Super Bowl, the president insisted that the IRS targeting scandal was merely a case of "bone-headed" decisions by bureaucrats. The scheme offered not even "a smidgen" of corruption he asserted, adding another layer to the White House's previous assurances that the while imbroglio had absolutely nothing to do with politics. In fact, the administration has released restrictive new guidelines -- crafted in secret -- that govern 501(c)4 organizations. The White House would have us believe these re-written rules stemmed from "confusion" over the old standards, a problem highlighted by the targeting misunderstanding. Newly-revealed emails expose that rationale as a lie, via the Wall Street Journal:

Mr. Obama wants Americans to believe that the targeting resulted from the confusing tax law governing nonprofits, which he says was "difficult" to interpret and resulted in mere "bureaucratic" mistakes. This is also the Administration's justification for issuing new regulations governing 501(c)(4)s that would effectively silence White House opponents this election year. Published in the Federal Register in November, the new rules cite the "lack of a clear and concise" regulation as reason for the rewrite. House Ways and Means Chairman Dave Camp blew up this fairy tale at Wednesday's hearing with new IRS Commissioner John Koskinen. Mr. Camp unveiled a June 14, 2012 email from Treasury career attorney Ruth Madrigal to key IRS officials in the tax-exempt department, including former director Lois Lerner...The email cites a blog post about the political activity of tax-exempt 501(c)(4) groups and reads: "Don't know who in your organizations [sic] is keeping tabs on c4s, but since we mentioned potentially addressing them (off-plan) in 2013, I've got my radar up and this seemed interesting." Interesting for sure. The IRS typically puts out a public schedule of coming regulations, and Mr. Camp noted that in this case "off-plan" appears to mean "hidden from the public." He added that committee interviews with IRS officials have found that the new 2013 rules were in the works as early as 2011, meaning the Administration has "fabricated the rationale" for this new regulation.


So they issued new regulations to clear up "a lack of clear and concise" rules in response to the targeting controversy -- except they began this process behind closed doors years before the targeting was disclosed publicly. "Fabricated the rationale" sounds right. I debated these developments with fellow Fox News Contributor Julie Roginsky this afternoon:


A few points: First, I'm relieved that Julie didn't resort to the "both sides were targeted!" rubbish other lefties often employ in these circumstances. She stuck more to the facts, defending Obama's narrowly parsed answer -- although the lack of criminal indictments isn't exactly dispositive quite yet. Recall that Lois Lerner invoked her Constitutional right not to...incriminate herself, in order to avoid testifying before Congress. That isn't an admission of guilt, of course, but it also doesn't lend credence to the president's claim that this whole episode is free of even a whiff of corruption. After the segment was over, I received an email from a viewer who reminded me of another sordid element to this story, which very much does point to corrupt behavior:


The National Organization for Marriage (NOM) filed suit against the federal government and the Internal Revenue Service Thursday, claiming it had “irrefutable proof” someone within the agency illegally leaked the conservative organization’s confidential tax returns to its ideological opponents last year. NOM is seeking damages from the disclosure, as well as to overturn a statute shielding the IRS from disclosing any information about the incident, according to a complaint filed by the Act Right Legal Foundation on behalf of NOM in the Eastern District of Virginia Thursday. The Human Rights Campaign (HRC) obtained the NOM’s 2008 tax returns in February 2012, which contained an unredacted list of donors, including presidential nominee Mitt Romney. The president of the HRC became a national co-chair for the Obama reelection campaign in 2012 a day later. NOM Chairman John Eastman said the group was able to remove redaction layers from the PDF documents that were leaked, showing that they came from within the IRS. The unauthorized disclosure of tax information is a felony punishable by up to five years in prison...Several other conservative organizations have had confidential tax documents leaked over the past year.


As for the contention that IRS targeting wasn't driven by politics, I think I dealt with that in the segment. These were heavily Democratic federal bureaucrats slow-rolling groups that just happened to be aligned against a Democratic administration -- and the abuse just happened to begin after Democrats began complaining bitterly about said groups in the press. A CBS News poll conducted at the height of the IRS story showed that more than two-thirds of Americans believe the wrongdoing was driven by politics. The dots are too obvious not to connect.