Live Open Thread: The State of the Union Address 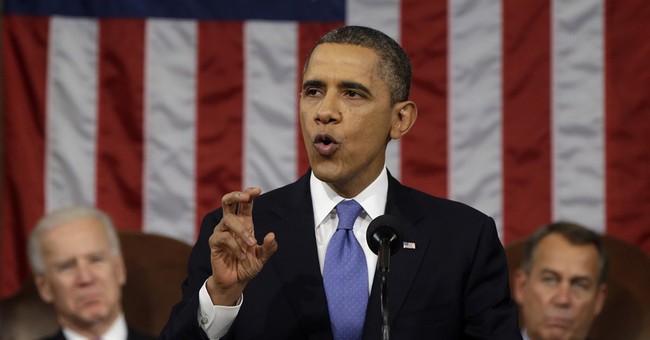 President Obama will deliver the 2014 State of the Union Address tonight at 9 pm ET. Among his laundry list of initiatives, we know that he'll address income inequality -- a low economic priority for most Americans -- and will again threaten to bypass Congress if it doesn't bend to his will. To that end, he'll announce an executive order raising the minimum wage for workers executing federal contracts. The White House won't say how many Americans the (possibly illegal) move will benefit, but that isn't the point. The point is to highlight hiking the minimum wage generally. Most Republicans oppose the idea because it actually hurts the people it's advertised to help, but it sounds good to the public. Democrats will try to press their advantage on this issue and hope for the best. Keep reading to discover why their search for a reset button is getting increasingly frenetic. Ultimately, though, it seems the president has all but given up on his party's 2014 fortunes. Appropriately, it also appears that most of the American people have given up on him. An new NBC/WSJ poll -- a series that's typically more favorable to Obama than other national surveys -- shows the president underwater on job approval (43/51) and personal favorability (42/44). The country's right track/wrong track numbers are dreadful, and Allahpundit notes that among the top words respondents employed to describe the current state of our union, four of the top five are decidedly negative:

Hope and change is long gone -- and even its highest-profile practitioners know it. CNN is pumping Obama's speech as a "defining test," but that framing assumes that Obama still possesses the capacity to move people with his words. Recent history would suggest that people have largely stopped listening; they're speeched out. Nevertheless, the show must go on. And it will tonight. Follow our tweets below, and feel free to inject your own running play-by-play in the comments section. I'll leave you with three thoughts: First, can Obama's populism and small ball dig his party out of its economic hole? WaPo's Chris Cillizza breaks down some additional polling data that should have Democrats sweating:

Americans trust Republicans more than Democrats to do a better job handling the economy 44 percent to 37 percent, according to a new Washington Post-ABC News poll. It's the first time since 2002 that Republicans have sported a meaningful advantage, and larger than any edge congressional Republicans have held over Obama during his administration. Perhaps even more striking: The numbers mark a mirror image reversal from the eve of the 2010 midterms, when Republican picked up a historic 63 House seats. In October of 2010, Democrats held an identical 44-37 advantage...The percentage of non-whites who say they trust the GOP more on the economy has doubled from 15 percent in 2010 to 32 percent now. Among Americans under age 40, it's climbed from 33 percent to 48 percent.


Second, are Republicans muddling their message by presenting, er, three separate responses to Obama's speech? And finally, the president is slated to take his "new" economic message on the road in an attempt to build momentum for his agenda. How excited are local Democrats? Toxic:

Spokesperson for @Burke4WI says Democratic candidate for Governor will not be joining @BarackObama in Waukesha on Thursday.