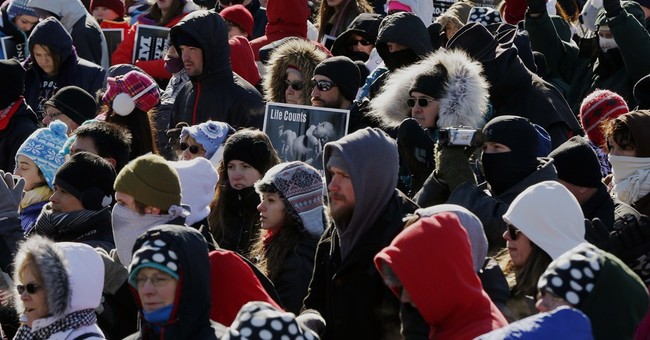 I was traveling yesterday, so I missed the annual March for Life -- which Cortney and Christine covered in person. Despite frigid temperatures, hundreds of thousands of pro-life Americans turned out to protest the US Supreme Court's 1973 twin decisions that imposed a regime of legalized abortion-on-demand throughout all nine months of pregnancy. A subsequent 1992 ruling scaled back the previous opinions somewhat, but a narrow 5-4 majority upheld the supposed Constitutional "right" to abortion. The abortion lobby and the political party they dominate would have the public believe that the freezing masses who marched on the National Mall yesterday are "extreme" members of a fringe, anti-women movement. Here's how the DNC attempted to frame yesterday's rally, the theme of which was "Adoption: A Noble Decision:"

On the 41st anniversary of Roe v. Wade, the GOP actually postponed its winter meeting to rally against women's rights http://t.co/Ua0Hn9sCoL


The RNC fired back:


Sadly, the Democratic National Committee sees this as an opportunity to go on the attack. It's disheartening that they would try to disparage the marchers and misrepresent their cause...There’s a reason Democrats try to distort Republicans’ respect for life. It’s because the majority of Americans agree with Republicans on important life-related issues.


Indeed, a raft of recent polling demonstrates that pro-life views are neither fringe nor extreme; they're the majority -- and in some cases, the vast majority. Hardcore "pro-choice" advocates frame the pro-life position as a misogynistic attack on women's rights as a means of disqualifying abortion opponents' opinions and shutting down debate. The fact is that tens of millions of Americans believe that fetuses are human beings worthy of legal protection, especially as pregnancies develop beyond the first few weeks. The thorny moral and legal quandaries of when life begins, and when the rights of a new person begin to conflict with the rights of the mother, are by no means settled in this country. A fresh national poll from Marist underscores this point. According to the survey, certain legal restrictions on abortion enjoy wide support:


The "choice" movement opposes the majority view on all of these proposals, arguing that they represent "undue burdens" on a mother's right to terminate her pregnancy. The poll also measures the public's overall stance on the legality of abortion:

Less than 20 percent of respondents voiced support for legal abortion beyond the first trimester. Forty-four percent adopted a view that would broadly qualify as "pro-choice." Fifty-six percent, however, said abortion should only be permitted in very limited circumstances, or not at all. This is the general spectrum of "pro-life" views, embraced by the Republican Party, and for which the GOP is excoriated as zealots by the other side. If you're skeptical of a single Marist poll that was commissioned by a Catholic organization, feel free to look into similar polling outcomes measured by Gallup, CNN, and NBC News over the last two years. A 2013 Harvard University poll of Millenial voters (aged 18-29) indicated that nearly two-thirds of young people support greater restrictions on abortion, including a simple majority who believe the practice should be outlawed in "all" or "most" circumstances. This Gallup survey confirmed the uptick in pro-life sentiment among the American electorate's youngest demographic. As for the "war on women" canard, several data points reveal that women are often more likely to oppose abortion "rights" than men. Following the national debate over an (overwhelmingly popular) Texas law barring most abortions starting in the sixth month of gestation, Quinnipiac found that women strongly supported the measure, backing it by a gaping 35-point margin -- twenty percentage points greater than the spread among men. In truth, it's the crowd that routinely smears the majority of Americans as cruel anti-women crusaders who are the true extremists. They've opposed legal efforts to outlaw gender-selective abortion, insisted that states permit non-doctors to perform abortions, staunchly defended late-term abortion, and struggled to articulate their position on infanticide. The Democratic Party even stripped its platform of the formulation that abortion should be "safe, legal and rare." These committed ideologues are far outside the American mainstream -- including among average 'pro-choice' citizens; their stance can only be described as pro-abortion. Tragically, the President of the United States is among their ranks. The "choice" movement wants the debate over abortion to go away. They regularly declare the issue "settled" and brand dissenters as extremists. But the Marist poll cited above shows that a majority of the country believes the discussion should continue, with six in ten young people calling for more debate, not less. The march for equality, human rights, and justice carries on.

I have watched a continuous wall of people, as wide as Constitution Ave. march for the last hour straight. No end in sight #marchforlife