Video: Can President Obama 'Reboot' His Second Term in 2014? 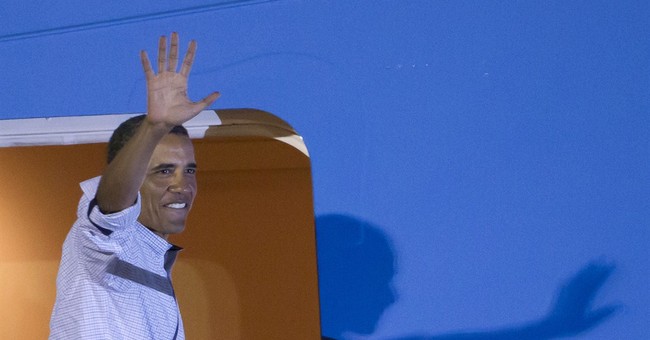 President Obama may have just endured a very rough 2013, but hope and change springs eternal. Democrats are hopeful that their party's leader will get his groove back in the new year, which could stem the building red wave that may carry the GOP to another midterm election victory. How likely is a successful 2014 Obama reboot? Not very, for reasons I discussed on Fox News yesterday (via Right Sightings):

In other words, the White House's efforts to breathe new life into The One's political fortunes will probably end up like Hillary Clinton's cheesy "reset button" moment with the Russians: A much-discussed, cringe-worthy misfire. The president's team will be battling against four forceful headwinds this year.

(1) Tune out. Obama's myriad pivots are often accompanied by "major addresses." But more and more Americans have largely tuned this president out, and when they do listen, they're more inclined than ever to doubt the veracity of his message. Thus, Obama faces a two-faced communications crisis -- he's increasingly ignored and mistrusted.

(2) Small ball. His "new" agenda is shaping up to be a barrel of retreads and small-ball initiatives. While immigration and gun control are charged issues that ignite partisan passions, neither one even comes close to rising to priority status for most Americans. Democrats' big minimum wage and income inequality push will certainly have some populist appeal, but again, it's out of step with what most voters are looking for. A 2013 Pew poll on the country's economic priorities revealed that job creation and handling the national debt far outpaced addressing the widening rich-poor gap -- which some economists say is a fiction in the first place. Fewer than two in ten Americans ranked this as an "issue of importance."

(3) Historical precedent. Midterm election cycles traditionally go poorly for any sixth-year incumbent president (although analyst Sean Trende argues that this bit of conventional wisdom is facile). Most recently, Republicans got absolutely demolished in 2006 -- in part because of general Bush fatigue, but especially due to the Iraq war. Democrats seized on a major issue and ruthlessly exploited widespread public discontent. In 2014, Republicans are poised to be the beneficiaries of a similar dynamic, with a potent issue of their own...which brings us to our final item:

(4) Obamacare. Obama's big first-term policy "achievement" remains a sopping wet blanket draped across both his presidency and his party. The drumbeat of bad news hasn't stopped in the new year, and will continue to snowball ahead of the fall elections. Every attempt to change the subject will eventually get derailed by the latest Obamacare contretemps -- which is precisely why the GOP will pound away at the unpopular law week in and week out. To wit, the RNC's fresh slate of radio ads that will air against vulnerable Democratic Senators: