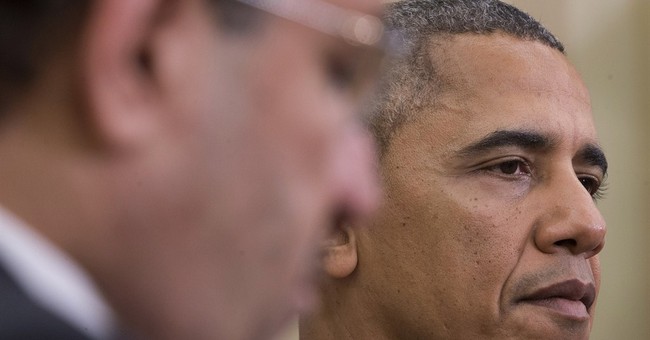 Over the weekend, Healthcare.gov was taken offline (again) for extended maintenance, as the administration's "tech surge" team scrambles to meet the new November 30 deadline. Failure to meet that deadline -- which has been greeted with skepticism by elected Democrats and IT experts alike -- would result in urgent discussions about a so-called insurance death spiral. David Axelrod is in full-blown, blame-Republicans damage control mode:

Undeniable: History of GOP resistance to, and subversion of, the ACA. http://t.co/wvYR3POM8G


Be sure to read MKH's take-down of the Politico piece Axe links to in his tweet. But horror stories from various state exchanges continue to plague the program as well. Attacking Obamacare's opponents is moronic to begin with, but how can Democrats blame the GOP for "subverting" Obamacare in places like Oregon, Hawaii, and Vermont? And do federal taxpayers realize how much money they've wasted on these failed state-based projects? As much as the law's technical difficulties have become a national punchline, the more lasting sources of frustration have arisen from Obamacare's broken promises. Millions of Americans are being stripped of their current health coverage, in direct contravention of the president's oft-repeated "keep your plan" pledge. NBC News reported last week that the administration's own 2010 analysis concluded that the promise would not stand up for many. The Wall Street Journal sheds additional light on this story, noting that the president's policy team raised concerns about issuing such categorical vows -- which were ignored by the White House's political operatives and speechwriters. Obama needed this lie as a means to an end; the truth was irrelevant. And now a lot of people feel violated, and that number could grow exponentially in the coming years. The Associated Press catches up with fresh victims:


Dean Griffin liked the health insurance he purchased for himself and his wife three years ago and thought he'd be able to keep the plan even after the federal Affordable Care Act took effect. But the 64-year-old recently received a letter notifying him the plan was being canceled because it didn't cover certain benefits required under the law. The Griffins, who live near Philadelphia on the Delaware border, pay $770 monthly for their soon-to-be-terminated health care plan with a $2,500 deductible. The cheapest plan they found on their state insurance exchange was a so-called bronze plan charging a $1,275 monthly premium with deductibles totaling $12,700. It covers only providers in Pennsylvania, so the couple wouldn't be able to see the doctors in Delaware whom they've used for more than a decade. "We're buying insurance that we will never use and can't possibly ever benefit from. We're basically passing on a benefit to other people who are not otherwise able to buy basic insurance," said Griffin, who is retired from running an information technology company. The Griffins are among millions of people nationwide who buy individual insurance policies and are receiving notices that those policies are being discontinued because they don't meet the higher benefit requirements of the new law. They can buy different policies directly from insurers for 2014 or sign up for plans on state insurance exchanges. While lower-income people could see lower costs because of government subsidies, many in the middle class may get rude awakenings when they access the websites and realize they'll have to pay significantly more. Those not eligible for subsidies generally receive more comprehensive coverage than they had under their soon-to-be-canceled policies, but they'll have to pay a lot more.


This couple's story illustrates a quadruple dose of breached assurances. The Griffins can't keep their plan, can't keep their doctors, won't receive better coverage, and won't enjoy decreased costs. Just the opposite, in fact. Now Democrats are getting antsy over the next major round of dropped coverage and sticker shock, which scheduled to hit roughly one year from now -- just before the 2014 elections:


According to an Affordable Care Act timetable established by administration officials, early next October insurance companies will announce their new menu of health care plans for the ACA marketplaces -- plans that may be more varied and numerous than those offered this year, but that almost certainly will come with higher prices. The likely price hikes will hit the individual and small-business insurance markets only weeks before Election Day on Nov. 4, 2014. "What genius came up with that timetable?" asked one key Democrat, who declined to be quoted by name because he is involved in private White House talks. Democratic senators and their political advisers have been lobbying the White House and the Department of Health and Human Services to push back the next "open season" date until after the election, to no avail.


They're not upset about the near certainty of higher prices. They're upset that people will find out about them around election time. "What genius came up with that timetable?" one frustrated Democrat sneered. That Democrat should look in the mirror. Meanwhile, new concerns about Healthcare.gov's data security safeguards continue to crop up. This example is rather disconcerting: "Justin Hadley logged on to HealthCare.gov to evaluate his insurance options after his health plan was canceled. What he discovered was an apparent security flaw that disclosed eligibility letters addressed to individuals from another state." Last week, Reuters revealed an internal administration memo warning of the "high risk" of unknown security flaws within the exchanges, due to insufficient testing. One data security expert discovered a "frighteningly simple" vulnerability within days. Parting thought: Is the White House abandoning their first-year Obamacare enrollment targets altogether? It sure looks like it:

How can they possibly make the math work if they're already jettisoning hard facts and figures in favor of vague, meaningless metrics?