Top Democrat: Of Course We Knew 'You Can Keep Your Plan' Wasn't Actually True 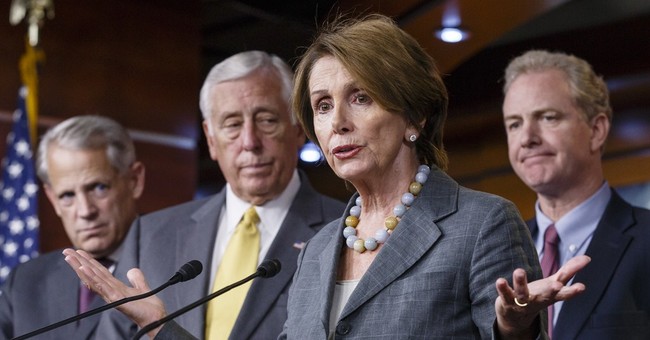 But that didn't stop Nancy Pelosi's top deputy, nor any of his fellow Democrats, from endlessly repeating that mantra. The truth can be a complicating factor when you're engaged in a calculated effort to bamboozle the public. They weren't lying per se, Hoyer insists. Their words simply weren't as "precise" as they could have been:


House Democratic Whip Steny Hoyer conceded to reporters today that Democrats knew people would not be able to keep their current health care plans under Obamacare and expressed qualified contrition for President Obama’s repeated vows to the contrary. “We knew that there would be some policies that would not qualify and therefore people would be required to get more extensive coverage,” Hoyer said in response to a question from National Review. Asked by another reporter how repeated statements by Obama to the contrary weren’t “misleading,” Hoyer said “I don’t think the message was wrong. I think the message was accurate. It was not precise enough…[it] should have been caveated with – ‘assuming you have a policy that in fact does do what the bill is designed to do.’”


The White House's take on this firestorm is that they've been telling the truth all along. Cue the Twilight Zone music, and prepare for a wild reinterpretation of the definition of 'fact:'

FACT: Nothing in #Obamacare forces people out of their health plans. No change is required unless insurance companies change existing plans.

Reid says insurance cancellations are "nothing new. Insurance companies cancel insurance plans - that's what they do"


Obamacare explicitly forces insurance companies to change and drop coverage options that fail to comply with new, mandate-heavy (read: expensive) requirements. The "keep your plan" charade was always a brazen lie -- and the administration knew it. Somehow, despite his pathetic ass-covering rationalization, Hoyer's explanation is the least deceitful of the three. In case you'd forgotten, here is the categorical promise President Obama has made over and over again for four years: "If you like your health care plan, you will be able to keep your health care plan. Period. No one will take it away. No matter what.” Watch this mash-up:


That's not "imprecise" language. In fact, that's very precise. It's also a shameless lie, as millions of Americans are discovering. CBS News reports that the estimated two million cancellation notices so far as just the "tip of the iceberg:"


It's an unexpected reality of Obamacare being told through anecdotes in local papers and on social media. But the hard numbers reveal the evidence is far more than anecdotal. CBS News has confirmed with insurance companies across the country that more than two million people are getting notices they no longer can keep their existing plans. In California, there are 279,000; in Michigan, 140,000; Florida, 300,000; and in New Jersey, 800,000. And those numbers are certain to go even higher. Some companies who tell CBS News they've sent letters won't say how many. Industry experts like Larry Levitt, of the Kaiser Family Foundation, say the insurance companies have no choice. "What we're seeing now is reality coming into play," he said. Obamacare forces them to drop many of their plans that don't meet the law's 10 minimum standards, including maternity care, emergency visits, mental health treatment and even pediatric dental care.


The White House's response to all this is to sniff that Obama didn't really say what he said, and chalking up the millions of affected Americans as "anecdotes." The level of arrogant perfidy is sickening. Meanwhile, many insurers and doctors are declining to participate in Obamacare at all, severely narrowing options for consumers within the exchanges. If the coverage "death spiral" plays out -- rapidly or gradually -- more insurers may drop out of Obamacare, resulting in fewer and more expensive options for those relying on the law. As premiums spike to compensate for losses (which may be artificially mitigated by hugely costly government bailouts for a time), healthy people will bid farewell to their carriers. If the remaining consumer pool is too sick to sustain, insurance companies will face the choice of withdrawing from Obamacare or going out of business. Either way, expect "access shock" to get a lot worse. And remember all the pre-launch data security concerns raised by Obamacare critics? It begins:


The Obamacare website has more than annoying bugs. A cybersecurity expert found a way to hack into users' accounts. Until the Department of Health fixed the security hole last week, anyone could easily reset your Healthcare.gov password without your knowledge and potentially hijack your account. The glitch was discovered last week by Ben Simo, a software tester in Arizona. Simo found that gaining access to people's accounts was frighteningly simple.


One wonders if avaricious identity thieves have been busy probing the broken websites for weaknesses, discovering back doors to people's sensitive information, and doing their thing. Mr. Simo is an upstanding expert who immediately alerted Obamacare's administrators to the "frighteningly simple" loophole he discovered. Others won't be so honorable. Let's wrap up by coming full circle. One newly-minted lefty excuse for the "keep your plan" lie is that the plans that have been discontinued are "junk." First off, a lot of people were fully satisfied with their "junk" coverage, and were told they could keep it..."no matter what." Wrong. And decidedly non-junk plans are also disappearing, forcing customers to pay a lot more. Finally, Jonah Goldberg reminds us why the Left felt compelled to willfully perpetrate The Big Lie: "If Obama had been honest about the trade-offs in his signature piece of legislation, it would never have become his signature piece of legislation. So please, don’t tell me the lies don’t matter."