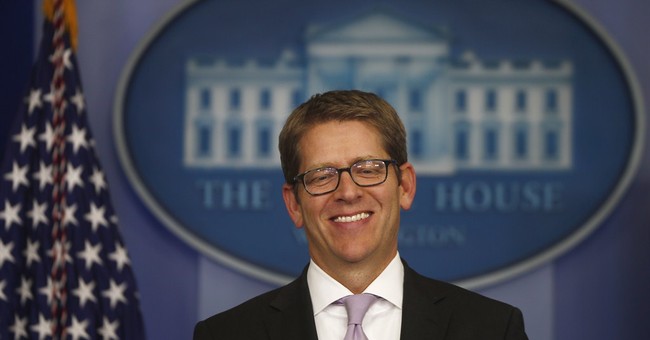 White House spokesman Jay Carney has a game plan for defending the indefensible: Refer every tough question to somebody else. The buck stops over there, at HHS -- the leader of which, by the way, answers to the president and is totally secure in her job. (1) On revelations that Obamacare's website failed last-minute pre-launch testing under traffic burdens far, far lower than levels that would have remotely simulated reality:


"I'm not familiar with the testing that was done. I would refer you to HHS for that."


(2) Who is involved in the so-called "tech surge" (which, incidentally, is unlikely to expedite an adequate resolution, according to numerous experts)?


"The tech surge was announced by CMS and HHS, so I would refer you to them."


(3) Considering the fact that healthcare.gov's budget tripled prior to its very public failure, how much more will the additional fixes cost, and what's the plan to pay for it? (Stay tuned for a bonus recitation of the preposterous claim that Obamacare will "reduce our deficits"):

"The budget for this is something that's housed over at HHS, and I would refer you to them..."

(4) When another reporter gingerly pushed back on Carney's constant referrals to HHS, Carney...referred him to HHS. Do note: President Obama is responsible for the performance of the Department of Health and Human Services. It's a part of his his administration. The cabinet secretary who oversees the executive branch department's day-to-day operations serves at the pleasure of the president. The White House's blatant attempts to pretend that these problems exist somewhere over there -- on the president's signature law, no less -- are absolutely pathetic. Finally, the great escape:

Buh-bye, reporters. As I said: Pathetic. Up for another round, Jon? And, oh by the way, many of Obamacare's technical difficulties are the direct result of political machinations orchestrated by...the White House.