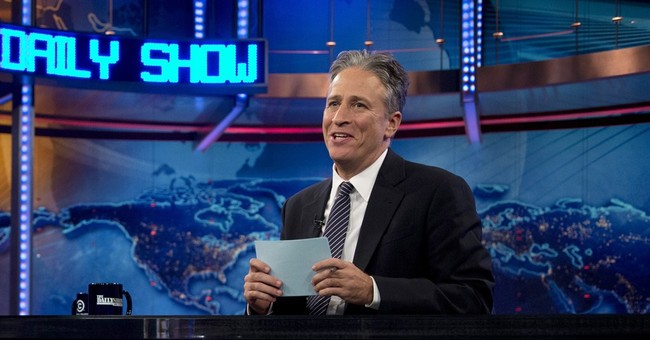 The Daily Show tends to hit its stride when pouncing on counter-factual political spin that collides with undeniable realities. Such an opening arose yesterday in the Rose Garden, and the resulting skewering did not disappoint. Mediaite's Josh Feldman describes the following monologue delivered by Jon Stewart as a "blistering takedown." Yeah, pretty much:

The president's remarkable attempt to, well, "spin this turd" yesterday was a titanic miscalculation. If anything, the Daily Show's research staff employed extremely generous statistics in tabulating Obamacare's enrollment "success" rate. By most accounts, more than 99 percent of visitors to exchange websites have been unable to enroll. The administration's own unofficial, inflated number (they say they won't release official stats until mid-November) tallies application attempts, not confirmed enrollments. And remember, of the 13 Obamacare "success story" human props who flanked the president yesterday, only three have actually completed the application process. Obama himself bragged that nearly 20 million Americans have visited healthcare.gov over the last three weeks, but separately boasted that "thousands" have enrolled. Do the math: "Success rates," even loosely defined, have been fractional. Based on New York's back-end mess -- which the federal exchanges share -- it's not unreasonable to ask if anyone at all is truly, fully signed up and covered at this stage. Stewart's unsparing assessment is important, given that young people remain the age demo most likely to tell pollsters that Obamacare implementation is going well. Ignorance is bliss. But if the depth and breadth of the failure, secrecy and dishonesty pervading the process begins to penetrate into popular culture -- The Onion has gotten in on the action, too -- the law will be in even greater peril than it already is. Obamacare's image is flagging among most Americans, and as public awareness of the program rises, positive feelings decline:


Public awareness of the new health insurance exchanges has risen substantially in the weeks since they opened, but only a small percentage of consumers have visited the sites. Most of those already have insurance and are simply trying to learn more about the program, according to a survey released on Monday by the Pew Research Center. The survey found that only about 3 in 10 people thought the exchanges were working well. That appears to reflect widespread reports that many of the 34 states with exchanges run by the federal government have encountered technical problems...Even among the uninsured who plan to visit the sites, many were not yet seriously thinking of the exchanges as a health insurance option. While 64 percent of uninsured Americans either have visited or plan to visit an exchange Web site, only 33 percent said they were looking at health insurance options for themselves and their families...Public assessments of the 2010 health care law are virtually unchanged from last month. Currently, 41 percent of Americans approve of the law, while 52 percent disapprove.


The large chunk of uninsured people who don't plan to obtain coverage through Obamacare (a trend also detected by Gallup) underscores the "death spiral" concerns that many experts are beginning to discuss. Uninsured Americans who have the strongest motivation to jump through hoops for Obamacare will naturally skew toward those who are sicker, older, and who qualify for generous taxpayer-funded subsidies. Many of these people have been unable to gain affordable care on the open market, so their sense of urgency is understandable. But if uninsured Americans who are generally younger, healthier and middle-class decide that it's not worth trudging through Obamacare's technological wreckage for the privilege of shouldering higher costs, the model breaks down. Because the new law requires insurers to take all comers, regardless of health status ("guaranteed issue"), at relatively comparable rates ("community rating"), a disproportionate influx of expensive, unhealthy customers will force companies to jack up rates on everyone else, simply to stay in business. If these additional rate hikes compel more average people to drop coverage, the downward spiral accelerates. Obamacare is the problem. The comprehensive failure of its launch is merely a symptom (big government incompetence and arrogance) of the underlying disease: Namely, an ill-conceived, harmful, unpopular, unaffordable program.