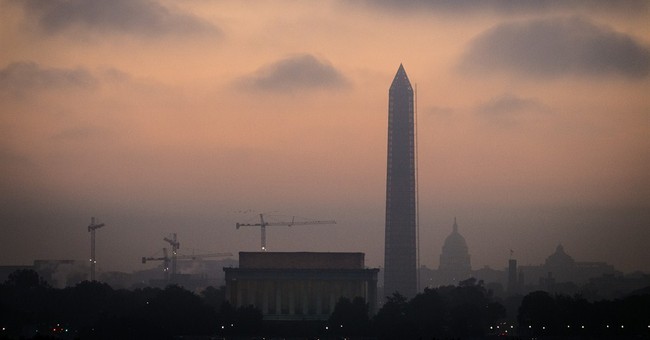 Yesterday's events were calamitous for Republicans. Once the House GOP revolted -- to no particular end -- the onus was shifted back to the Senate, with Harry Reid holding every trump card. An enfeebled Mitch McConnell has evidently done his best to arrive at some form of face-saving deal, which we'll get a look at soon enough. Details are sketchy, but expect a vote today. ABC News reports:


With less than a day remaining before the debt limit is reached, Congress will need to work feverishly today to pass compromise legislation that would extend the debt ceiling and end the government shutdown. The hope now lies in the Senate, where Majority Leader Harry Reid, D-Nev., and Minority Leader Mitch McConnell, R-Ky., have worked for days to craft compromise legislation. Both sides say they believe those talks will soon yield a proposal that would pass the Senate and eventually be taken up in the House...The Senate's proposal is not expected to include much of what conservative Republicans could support, which could make its path in the House rockier. If Boehner insists on passing legislation with a majority of his caucus, he would be forced to amend a Senate proposal. Democrats, on the other hand, have encouraged him to take up the Senate's proposal with help from Democratic votes. But such a scenario would be a damaging political defeat for a Republican House speaker who has already struggled to corral his strong-willed caucus.


Based on rumors flying around the Hill last night and this morning, Boehner will indeed jettison the 'Hastert Rule' and lean on Democratic votes to pass the Senate deal, which is already gaining support from upper-chamber Republicans:

They're ready for what Boehner calls a "tough vote"--a vote where the Rs needs Ds to pass it through the House. "Get it over with," says one


It looks like the Speaker will basically tell his caucus, "we had a fairly weak hand in the first place, and we blew our leverage yesterday. We're not hitting the debt limit, so I'm bringing up the Senate bill for an up-for-down vote." Some of the conservatives who torpedoed a slightly more palatable deal yesterday will object, but they've ceded their power in this fight. The Wall Street Journal begs the GOP to wrap up its "comedy of errors" and accept the denouement they've engineered for themselves. An excruciating reality is setting in:


Republicans now face the reality that they will not get any major concessions from Democrats in exchange for raising the debt limit and re-opening the government. It will be an ignominious end to a saga that has ravished the party in public opinion polls and has raised doubt in financial markets that the two political parties are capable of resolving their differences. Neither the Senate plan nor the House's short-lived proposal defunded or postponed President Obama's health care law, which was the center of tea party Republican demands for re-opening the government. And even more modest concessions put forward by Boehner -- for example to repeal the unpopular tax on medical devices and repeal government subsidies for congressional and administration staffers -- could not get enough Republican support to pass.


If and when Boehner brooms the "majority of the majority" precedent to pass whatever emerges from Reid-world (not the first time he's done so, by the way, and a previous instance was eerily similar to this one), will his speakership be in jeopardy? Perhaps. But probably not:

There's not a push to get rid of Boehner. Not at all. The disappointment was twd Boehner, Cantor for listening too much to a bloc of 20

One more: If Boehner is forced out by tea party for accepting deal (which won't happen), who raises their hand and says "I want that job!"


Silver lining: Once this is all behind them, Republicans can work to build upon some of the advantages they still hold with the public. Step one should be shining the brightest light possible on Obamacare's failures, as the media will no longer be hyperventilating about shutdown and default. Speaking of Obamacare, stay tuned for another piece on that later today. 'Trainwreck' is not hyperbole.

Parting thought: I'm still gobsmacked over the president's insane and reckless veto threat yesterday. He signaled that he'd be willing to keep the shutdown going and risk a deeply harmful technical default in order to protect a special DC Obamacare carve-out. Republicans could have absolutely thumped him for that irresponsible and super-unpopular threat. Too bad they didn't even give themselves a chance to call his bluff. Enforced errors galore.


UPDATE - Politico has more details on the contents of the Senate deal, which the House may actually pass first as a matter of expedited procedure.

Per Sen sources, Boehner has agreed to take up the Senate's plan and allow it to pass with Dem votes.