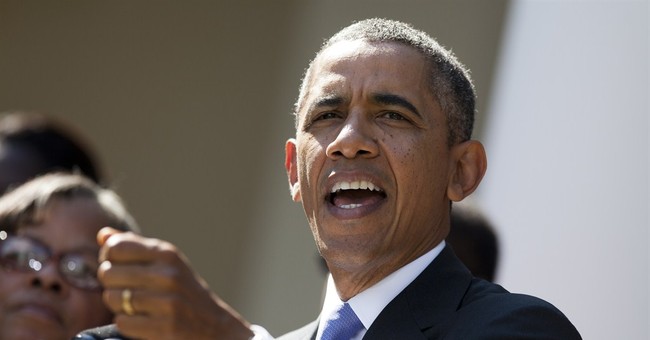 The Obama administration could not care less about those affected by the current budget impasse. Sure, they wail about the human tragedies, but that's all agitprop. They think they're winning, so let the bad times roll:


Said a senior administration official: "We are winning...It doesn't really matter to us" how long the shutdown lasts "because what matters is the end result." White House allies, however, say a long shutdown could make the White House's position less tenable. Mr. Obama is the most visible symbol of the U.S. government, they say, and will inevitably share in the blame as hardships mount and people weary of the infighting. Already, the shutdown has produced images of inconvenience, lost pay, and disruptions in wedding and vacation plans. The Republican National Committee has offered to cover the cost of keeping open the World War II memorial for the next month after a group of veterans toured the site even though it was closed due to the shutdown. "To the extent that any blame washes onto the Democrats and the president, it's going to be from the sense that this town is just completely dysfunctional and it's everybody's fault," said Matt Bennett, senior vice president of Third Way, a center-left think tank.


But as the latter quote suggests, is the White House's confidence a bit misplaced? Let's not kid ourselves. Things aren't exactly peachy for the GOP as they ride out this shutdown fight with Democrats, but the Obama/Reid/Pelosi triumvirate is having its own struggles, too. Rand Paul and Mitch McConnell are right: Saying "we refuse to even negotiate" isn't a winning message with a public that demands compromise. Dozens of House Democrats have peeled off from party leadership to back various GOP funding bills, including efforts to delay the unraveling debacle known as Obamacare, funding veterans programs, and restoring money to the NIH. Furthermore, National Journal has published an unsparing assessment of the president's leadership -- or lack thereof -- in Washington. The analysis suggests that the man who ran as a uniter has not only been divisive, he's actually made the Beltway's poisonous climate worse. The piece begins with this blistering open letter to Obama:


Mr. President, We thought you were different, but you turned out to be like all the others. You promised hope and change, but we trust government even less than before. You offered a new brand of post-partisan governing, but the red states and blue states are farther apart than ever. Washington was a mess when you arrived in January of 2009, but by breaking your promises and, frankly, our hearts, you made it worse. You vowed to ban lobbyists from the White House only to sneak them in through loopholes. You barred corporate donations to the first inauguration but let the special interest money rain down the second time around. You even learned to love super PACs. How could you? Signed, Hopeless and Changed (for the worse)


Oof. The White House can shrug off criticism from one columnist, but can they afford to breezily blow off these poll numbers from Bloomberg and CNN, too?


(1) A recent Bloomberg survey found that 40 percent blame the GOP for what's wrong in Washington, while 38 percent blame the president and congressional Democrats. Back in February, Obama had a nine-point edge over Republicans and independents were evenly divided over who was responsible. (2) Now, 42 percent of independents fault with Obama and his allies in Congress, while 34 percent blame Republicans on Capitol Hill. (3) The latest CNN poll found a similar trend, with the percentage who blame congressional Republicans for a government shutdown down five points and the percent who blame Obama up three points.


Democrats' handling of the shutdown has been ham-fisted, on messaging, on tactics, and on optics. The great Charles Krauthammer lowers the boom as only he can:


President Obama indignantly insists thatGOP attempts to abolish or amend Obama­care are unseemly because it is “settled” law, having passed both houses of Congress, obtained his signature and passed muster with the Supreme Court. Yes, settledness makes for a strong argument — except from a president whose administration has unilaterally changed Obama­care five times after its passage, including, most brazenly, a year-long suspension of the employer mandate...The mainstream media have been fairly unanimous in blaming the government shutdown on the GOP. Accordingly, House Republicans presented three bills to restore funding to national parks, veterans and the District of Columbia government. Democrats voted down all three. (For procedural reasons, the measures required a two-thirds majority.) Senate Majority Leader Harry Reid won’t even consider these refunding measures. And the White House has promised a presidential veto. The reason is obvious: to prolong the pain and thus add to the political advantage gained from a shutdown blamed on the GOP.


Both parties are are fundraising off of the shutdown, but only one is simultaneously shunning negotiations. Republicans should highlight this cynicism early and often.