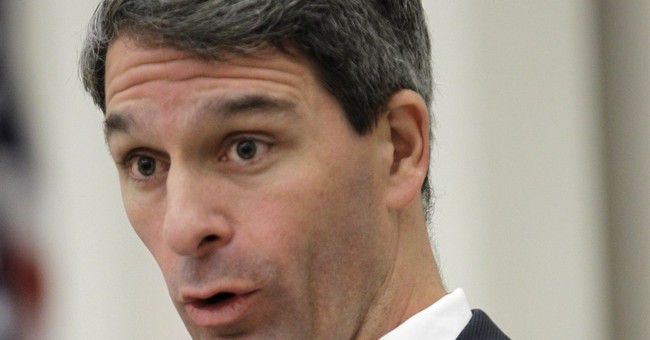 It's been awhile since we've seen any new polling data out of the Virginia gubernatorial race, so Quinnipiac's fresh numbers are significant.  They also contain worrisome news for Republican Ken Cuccinelli, who trails Democrat Terry McAuliffe by six points among likely voters with two-and-a-half months until election day:


Democrat Terry McAuliffe has a 48 - 42 percent lead over Republican State Attorney General Ken Cuccinelli in the race to become Virginia's next governor, according to today's Quinnipiac University poll, the first survey in this race among voters likely to vote in the November election. The six-point lead for McAuliffe is not comparable to previous surveys by the independent Quinnipiac (KWIN-uh-pe-ack) University, taken among registered voters.


Both candidates are struggling in the "honest and trustworthy" department, while Cuccinelli leads on the experience quotient.  McAulliffe's edge is on "caring," a Democratic calling card.  Here are the most important data points in the survey:


McAuliffe carries Democrats 92 - 1 percent while Cuccinelli wins Republicans 90 - 6 percent. Independent voters are divided with 42 percent for McAuliffe and 44 percent for Cuccinelli. The candidates break even 45 - 46 percent among men while McAuliffe takes women 50 - 38 percent.


McAuliffe enjoys nearly unanimous support among Democrats, whereas Cuccinelli has a few more GOP peel-offs.  The Republican also holds a tiny edge among independents.  Once again, the gender gap has emerged as a big factor; women are entirely responsible for McAuliffe's edge.  (Are Virginia women aware of McAuliffe's priorities as a husband and father)?  The Cuccinelli campaign is beginning to push back on this theme, although web videos and press releases won't cut it.  Anecdotally, I live in northern Virginia and have seen a parade of attack ads against Cuccinelli, most of which harp on his opposition to abortion, even in the relatively infrequent cases of rape and incest.  I cannot recall having seen a single Cuccinelli campaign spot over the course of normal television viewing (as opposed to reporting about them here), let alone one pointing out the unpopular extremist stance McAuliffe's party has adopted on the issue.  Part of this on-air disparity is due to McAuliffe's wide fundraising advantage, which is a real problem for the GOP nominee.  The most troubling element of this poll is that it comes amid a flurry of almost universally-badheadlines for McAuliffe.  He is an extraordinarily flawed candidate whose problems continue to pile up, yet he's winning.

This should be particularly alarming for grassroots conservatives.  If Chris Christie wins re-election comfortably in New Jersey (which, despite his slight down-tick, remains very likely), while staunch conservative Ken Cuccinelli loses to one of the worst major-race Democratic candidates in recent memory, what lessons will the Republican Party and many future primary voters internalize?  Cuccinelli's hard-charging -- some might say abrasive -- style and campaign missteps have made caricature artists' lives a bit easier.   In fairness to Cuccinelli, he's also hampered by an obstacle of someone else's making: Under normal circumstances, he'd be running to maintain the popular and successful policies of current Republican Governor Bob McDonnell.  Unfortunately, McDonnell has made that no-brainer campaign strategy much more difficult, thanks to this boondoggle, and his ethics issues.  Quinnipiac's chief pollster weighs in, stating, "it seems obvious that Gov. Bob McDonnell's political troubles are hurting fellow Republican Cuccinelli. Guilt by association may not be fair, but it sure is politically powerful."  Nevertheless, though Cuccinelli is down, he's definitely not out:


Voters have a 41 - 35 percent unfavorable view of Cuccinelli and disapprove slightly, 46 - 42 percent, of his performance as attorney general. They have a split 34 - 33 percent favorable/ unfavorable opinion of McAuliffe.


Democrats have done a good job of negatively defining Cuccinelli, who represented a suburban State Senate district for years and won statewide office overwhelmingly in 2009.  He's a known commodity.  Based on the figures above, McAuliffe remains a largely unknown quantity.  Republicans still have time -- and plenty of ammo -- to introduce their opponent to many voters, who remain disengaged from the race.  But time is of the essence.


UPDATE - The Cuccinelli campaign reached out to me, questioning the accuracy of the poll, based on turnout models.  They even link to a liberal blog that almost totally dismisses the numbers as historically bunk.  The campaign's analysis is well-taken, but I'm also quite wary of dismissing bad-looking polls after 2012.  Granted, this is an off-year election, so the electorate is likely to be markedly different -- but conservatives (including yours truly) made compelling cases against the 2012 presidential polls and turned out to be wrong.