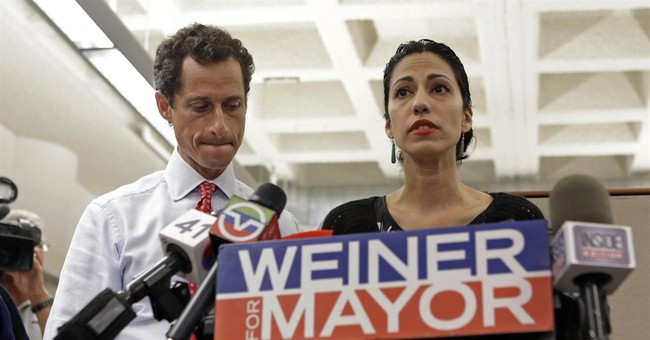 Apparently even New Yorkers have their limits on issues of propriety in politics (cue the juvenile double entendres) :

Mayoral candidate Anthony Weiner has suffered a massive erosion of support among New York City Democrats following revelations this week that his sexting with women continued long after his 2011 resignation from Congress, a new NBC 4 New York/Wall Street Journal/Marist Poll has found.  Weiner's favorability rating among registered Democrats has tanked since June, from 52 percent to 30 percent, according to the poll conducted Wednesday. Over that same period, the percentage of Democrats who said they had an unfavorable impression of Weiner spiked from 36 to 55. His lead over City Council Speaker Christine Quinn has also evaporated; 25 percent of Democrats said they'd now vote for her in the Sept. 10 Democratic primary, and 16 percent said they'd back Weiner. A poll conducted last month had Weiner leading Quinn 25 percent to 20 percent.

"Carlos Danger's" creepy, emotionless press conference this week -- replete with pro forma expressions of contrition and a surreal statement from his wife -- hasn't stoped the bleeding, apparently.  Go figure.  The New York Post's Karol Markowicz makes the case that Huma Abedin, Weiner's wife, has forfeited her role as the sympathetic victim in this tawdry saga:

What makes Huma Abedin different isn’t that she stood by her man, while pregnant, as he publicly disgraced their marriage, and lied about it repeatedly while blaming the same “vast right-wing conspiracy” as Hillary. No, Abedin took it a step further. She didn’t want him to resign, according to what Anthony Weiner later told The New York Times — plus, she encouraged him to jump into the mayoral race. Mind you, from what the couple now tells us, she knew when she was pushing him to run that he’d kept up the sexting for months and months after he left Congress. And, as the two were plotting his political comeback, Abedin posed for soft-focus People Magazine photos painting the picture of a happy family that had moved on from Weiner’s indiscretions. Moved on? Shortly after their publication, he sent new pictures of his privates to new women. On Tuesday, Weiner was telling everyone that he told Abedin everything. Was he lying again, or has she known all along? If she has, then when she told People, “Anthony has spent every day since [the scandal] trying to be the best dad and husband he can be,”she was lying. And if she wasn’t lying then, she’s lying now, because she’s backing his claim that he told her everything.

We'll never know if Abedin realized Weiner was a dirtbag before she married him.  We do know, however, that after his dirtbaggery was revealed to the world in stark relief, she still urged him to return to the public sphere.  She married a powerful man, dammit, and she'll endure whatever she must to restore that dynamic.  But what if Weiner's political career is cooked for good?  Is there enough genuine love and trust in that relationship to make it last?  That's none of our business, frankly, but everyone should hope they make it work -- for the sake of their child.  That being said, the people of New York do not owe Weiner anything.  As I wrote during the recent Mark Sanford race, every last one of us is flawed -- and grace and forgiveness are worthy ends.  But forgiveness does not require voters to restore a disgraced politico to an influential position of public trust, particularly when that trust has been recklessly and cavalierly violated.  Repeatedly, in Weiner's case.  New York City voters seem to agree.  I'll leave you with this,  um, "reassurance" from Elliot Spitzer:

A day after Anthony Weiner acknowledged that he continued sending lewd messages to women even after he resigned from Congress, former Gov. Eliot Spitzer said he hadn’t used prostitutes after his own downfall in 2008.  “Absolutely not,” Mr. Spitzer said when asked at a campaign stop at the Staten Island Ferry Terminal Wednesday if he had been with prostitutes after his resignation as governor of New York. “And we’re done answering those questions.”