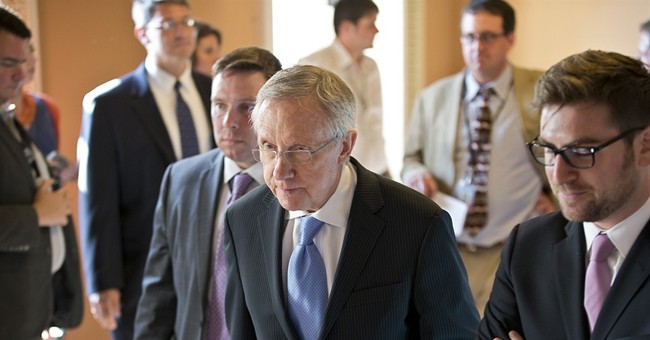 Harry Reid just made a series of vague statements on the Senate floor, implying that John McCain had brokered a compromise that would avert a "nuclear" detonation in the upper chamber:


"We may have a way forward on this." Reid, implying he may not detonate the nuclear option after all.


McCain spoke briefly, praising the tone and productive nature of last night's four-hour private Senate meeting. Nearly every Senator attended the gathering, several of whom have commented publicly about its seriousness of purpose. After McCain's remarks, Reid stood back up and lavished praise on Arizona's long-time Republican Senator:


Sounds like they've agreed to confirm Cordray, but may relent on the NLRB appointees. Maybe. Reid lavishing praise on McCain.


Reid stressed that details were still being discussed in private, so we'll have to wait to see what comes next. The Majority Leader hinted that the tentative accord would satifsy everyone to some extent, though neither side would get everything it wanted.  Extrapolating from Reid's words, and based on what I'm hearing, it sounds like the delicate deal may shape up as follows:  (1) Republicans will allow votes on President Obama's controversial pending nominees, such as radical Thomas Perez at Labor, and the new EPA administrator.  The GOP already extended this offer last week, and Democrats rejected it.  (2) Republicans will allow a vote on Richard Cordray to be confirmed to lead the controversial and unaccountable new Consumer Protection Bureau created by Dodd-Frank.  Cordray is one of the three nominees Republicans have long blasted as illegitimate.  Why?  Because he was given a "recess" appointment from Obama on the same day, in the exact same way, as the two NRLB nominees whose bogus "recess" appointments have been rejected by federal courts.  Cordray's appointment hasn't technically been ruled illegal like the other two, which may explain Republicans' willingness to play ball on his nomination.  That's the fig leaf.  A technicality.  (3) Democrats will submit new NRLB nominees for consideration, excluding the two who were unconstitutionally installed in 2011 early 2012.  Capitol Hill sources say Republicans remain dead set against those two and refuse to reward President Obama's unlawful behavior.  It sounds as though Democrats might -- might -- agree to tolerate the GOP's steadfast opposition to those two appointees and not execute the nuclear option in response.  Whether a deal really exists, and how it may play out remains in flux.  David Drucker captures the confusion and mixed signals well:


From combination of my best sources, #NukeOption situation & whether will be avoided appears very fluid. Receiving much contradictory info


Back to the waiting game.  UPDATE:


Sen. John McCain (R-AZ) on nuclear option: We have a deal. It's for Harry and Mitch to announce it.


Presumably the president has agreed to whatever deal exists, considering that he'd need to send over two new NLRB nominees.


UPDATE II - TPM has more details on the agreement, which align with what I reported above.   This is an ugly deal for Republicans, frankly, but they had very little leverage once it became clear that Harry Reid was fully willing to go nuclear.  Democrats get virtually everything they want within this crop of appointments, minus the two patently illegal nominees.  Reid's big concession is not blowing up the filibuster, a move he "earnestly" opposed when he was in the minority.  So the filibuster escapes unscathed, at least for now.  On balance, that's probably a good thing -- even though the GOP paid a steep price to keep the mechanism intact.  The alternative was to adopt a more aggressive posture, watch Democrats nuke the filibuster, then find themselves powerless to stop any current or future nominations...and eventually legislation.  A lose/lose, and Republicans probably negotiated to suffer the less harmful loss.  As I write this, cloture on the Cordray nomination was just achieved with 71 votes.