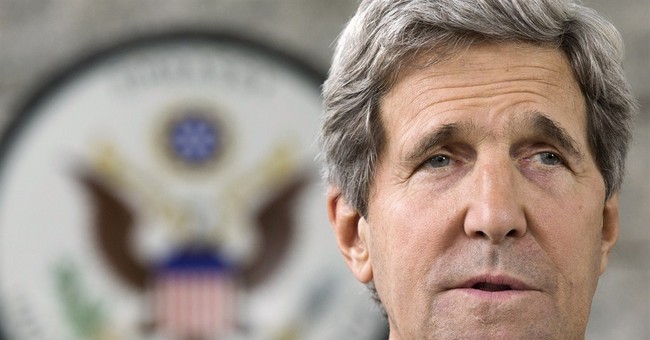 The Obama administration is probably hoping that you missed a few stories over the long holiday weekend.  The first is the major Obamacare delay, which we'll continue to cover in depth.  The other is more likely to escape additional scrutiny.  Katie covered many of the basics on Friday:

U.S. Secretary of State John F. Kerry — who spent the Fourth of July on sun-splashed Nantucket even as the chaos from a military takeover rocked Egypt — drew fire from Republican critics who said it’s a bad time for the nation’s top diplomat to be seen cavorting on an island getaway. “It doesn’t look good, and I think it sends the wrong message” said Republican strategist Brad Marston. “If I were advising him, I’d already have him on a plane.” As first reported on bostonherald.com, Kerry, who owns a house and a yacht on the ritzy retreat, was seen yesterday strolling down Federal Street away from July Fourth festivities on Main Street in jeans and a light-colored polo shirt. Later in the afternoon, Kerry was seen offloading bags from a single-person kayak to a boat in Nantucket Sound after launching from the beach behind his home at 5 Hulbert Ave.

It's self-evident why these optics are problematic for the Secretary of State and his boss, in light of the ghastly scenes playing out in Tahrir Square at the time:

Let's stipulate: Americans shouldn't begrudge our political leaders some R&R over a holiday weekend, and I think some conservatives go overboard in their criticisms of the Obamas' vacations.  But when your job description is America's top diplomat, you simply must abandon your rest and relaxation plans when one of the most vital countries in the Middle East is undergoing a real-time tectonic shift with American interests at stake.  You most certainly should not be off on your yacht or kayaking.  Nevertheless, thanks to the wonders of modern technology, it's entirely possible that Kerry was looped in to the developments in Cairo and beyond from Nantucket.  He may have been just as up to speed on everything as most Americans would expect and demand.  Nevertheless, the fact that Kerry was rumored to be aboard his yacht during the throes of Egypt's military coup paints a politically problematic image, even if appearances can be deceiving.  I'd submit that if the State Department had promptly and transparently explained how Sec. Kerry was carrying out his duties from a remote location, his 'crisis-management-in-Sperrys' moment would have been a one-day story.  A minor embarrassment, at worst.  (Although a strong argument can be made that he should have canceled his vacation altogether based on the severity of the events on the ground -- including the death of a US citizen, and the removal of American diplomats from Cairo).  Instead, State Department spokeswoman Jen Psaki -- a highly partisan Obama campaign retread in the mold of Stephanie Cutter -- categorically and repeatedly denied that Kerry was ever on his yacht during the events in Cairo:

State Dept's @jrpsaki says re CBS tweet on @JohnKerry: "Any report or tweet that he was on a boat is completely inaccurate."


Only when contradictory photographic evidence emerged did State come clean with the public:


Which brings us to the real point, via Twitter's NumbersMuncher, and reinforced by Brit Hume:


Put another way: If the State Dept will so stupidly lie to cover up for Kerry, imagine what they'd do for Hillary or Obama. #Benghazi

So would the State Dept. have stuck to its false denial re: Kerry & yacht if that photo hadn't surfaced? Not State's 1st trouble w/truth.


The obvious counterpoint to complaints regarding Kerry's whereabouts is, ahem, "what difference does it make," so long as he was doing his job?  I'd be more sympathetic to that push-back if Kerry's spokeswoman hadn't lied to the public.  Psaki was clearly willing to deliberately (or just reflexively) advance a dumb, verifiable claim to (at least temporarily) blunt criticism of her boss.  When the stakes were relatively low, she lied to protect her superiors.  If the State Department is fine with spoonfeeding the public false information on the trivial matter of John Kerry's yachting schedule, why should anyone believe their assertions about a legitimate scandal like Benghazi?  The potential fallout for Hillary Clinton from that catastrophe was obvious from the start.  We've since heard whistleblower testimony about systemic truth-suppression and seen documents confirming high-level political manipulation of intelligence related to the attacks.  Given the State Department's impulse toward deceit during 'Yachtgate,'  is it any wonder that 71 percent of the public wants Congress to sustain its investigation into the 9/11/12 terrorist attacks that claimed the lives of a sitting ambassador and three other Americans?  I'll leave you with a friendly reminder that our government has identified several of the Benghazi terrorists, yet they remain free men.  Why?  Political posturing and pandering at the White House.


UPDATE II - Another friendly reminder: The Hillary/Kerry State Department is embroiled in other serious scandals beyond Benghazi, involving covering-up and stymieing potentially damaging investigations into malfeasance.  Can we believe anything Psaki says about any of them?