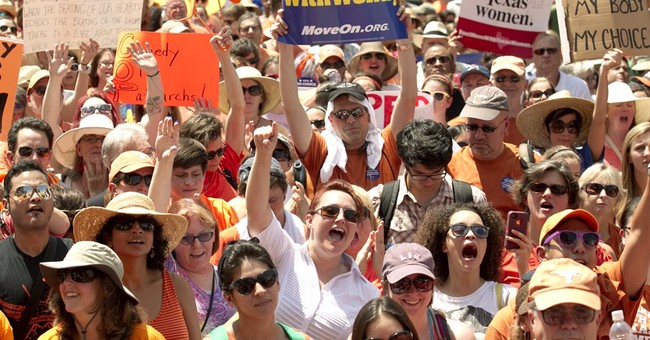 For a few hours yesterday afternoon, I thought wishing rape upon pro-life legislators and their families would represent rock bottom for the abortion zealots who've descended upon the Texas capitol to picket in favor of late-term abortion.  And then I heard about this.  There are no words:


Crowd of anti abortion activists giving speeches while a group of people chant hail Satan in the background. #hb2pic.twitter.com/eqHqP1e0gz


The video is HERE.  The hardcore abortion crowd (not to be confused with garden variety pro-choicers, in fairness) were in rare form last night on Twitter as this story began to trend.  They seemed to be split into two camps:  (1) "This is irony, you humorless wingnuts!" or  (2) "these were right-wing plants trying to make us look bad!"  Those excuses are tough to reconcile, and neither is compelling.  It's hard to even conceive of an action more depraved and self-defeating than the tactic of drowning out "Amazing Grace" with chants of "Hail Satan" -- especially considering that the screamers were attempting to paint the singers as extremists.  Their hatred is visceral.  Their behavior is despicable, and because it's profoundly unhelpful to the abortion movement, the unbelievably biased and agenda-driven media (especially on this issue) will likely ignore it for the most part.  But rest assured that the next time someone within a mile of a Tea Party event says or does something untoward, another round of concern-trolling and lectures our "rhetoric" and the "culture of hate" will immediately ensue.  All pro-lifers and defenders of decency can do in this case is to help make sure as many fellow citizens see and hear about this incident as possible.  And if you're the praying type, you might consider praying for the deeply troubled souls who literally chanted "hail Satan" in defense of late-term abortion.