So Much Fail: McConnell Challenger Announces Senate Bid...Sort of 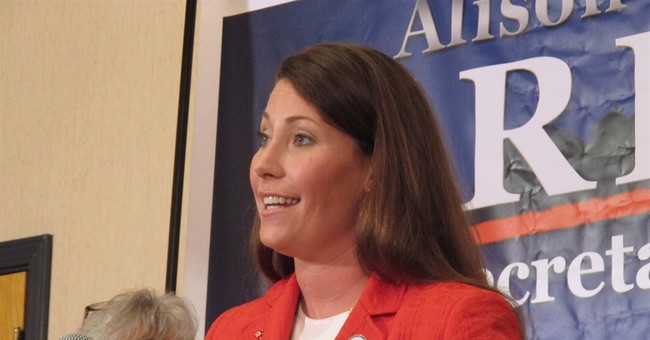 When the Ashley Judd flirtations fell by the wayside, Kentucky Democrats realized the needed to field an actual candidate to challenge incumbent Sen. Mitch McConnell, who they've insisted is vulnerable.  After a series of damaging distractions -- including racist attacks on McConnell's Taiwanese wife and the Watergate-style eavesdropping scandal -- it seems they've found their woman:

Kentucky Secretary of State Alison Lundergan Grimes announced Monday that she’s challenging Senate Minority Leader Mitch McConnell, giving Democrats their top recruit in the race. “I’m here today to tell you that I have met with my supporters, we have had a great conversation and determined and decided that we can next make the best move, the best difference in the Commonwealth of Kentucky by running for the U.S. Senate,” Grimes said at a news conference Monday afternoon. Grimes’s decision to run is a boon for Democrats in their chances of defeating McConnell. Even though she’s a political novice, she’s generally seen as the most formidable of the remaining Democratic candidates still considering a run.


McConnell isn't wildly popular in his home state, but flipping his seat would be an enormously tall order even without conservative fury over the IRS scandal, the implementation of Obamacare, and the president's war on coal standing at the ready as killer issues for the long-time incumbent.  No matter how you slice it, this is a heavy, heavy left for Democrats -- but at least Grimes is off to a strong start (via the NRSC):


Mom always told us to make a good first impression. Yesterday after taking months to decide whether to run for Senate, Alison Lundergan Grimes called a last minute press conference that she ended up being more than 30 minutes late to.  Rumors swirled.  Would she run?  Political operatives from both parties speculated that a Monday afternoon during a Holiday week was a bizarre time to launch a Senate campaign and suggested the reluctant candidate would pass...

1. Grimes’ announcement led off with the wrong backdrop (it was a campaign backdrop from her run for Secretary of State – her staff announced it was the only backdrop they had).  In other words, Kentucky’s Secretary of State apparently needs a primer in federal campaign finance laws.

2. Grimes spoke from a podium that carried on microphone stuck in a toilet paper roll.  We’ve been around a lot of last minute press conferences, but we’ve never seen anything like this.

4. There was no website. No literature. No stickers. No signs. No social media presence. No momentum.  We’ve seen campaigns for student council Vice President kick off with more. It was so bad that Grimes’ team had to claim that Grimes actually didn’t announce yesterday… that was just the launch before the launch…umm… mmmkay.

5. The candidate’s performance underwhelmed.  Lundergan Grimes is beyond green – and not just on her anti-coal policy.  We’ve noticed that she repeatedly tries to get by with sound bytes, buzzwords, generalities, and vapid platitudes that read as though they were written by a Deputy Press Secretary over at the DNC.  Yesterday was no different. After keeping reporters waiting for more than 30 mins, the candidate spoke for under five. Ben Shapiro noted that in Kentucky, Lundergan Grimes “is widely perceived in the state as a wooden politician with little charisma, and a family legacy of Democratic Party politics.”   It showed. “Grimes took just two questions Monday. Asked her feelings on Obamacare, she said this election can’t change who is president….” This from the candidate who proudly nominated Barack Obama for President at last year’s Democratic National Convention – despite residing in a state that opposed him by more than 20 points (you know, when we could have changed who is President).

That's it.  And she's an announced, major party candidate for the United States Senate.  I can almost feel the McConnell campaign quaking.

UPDATE - Now we have an indication as to why Grimes' roll-out has been so unprofessional and shambolic: The candidate reportedly didn't know what her own decision would be until yesterday -- after she arrived to make the announcement.  This piece is bizarre.