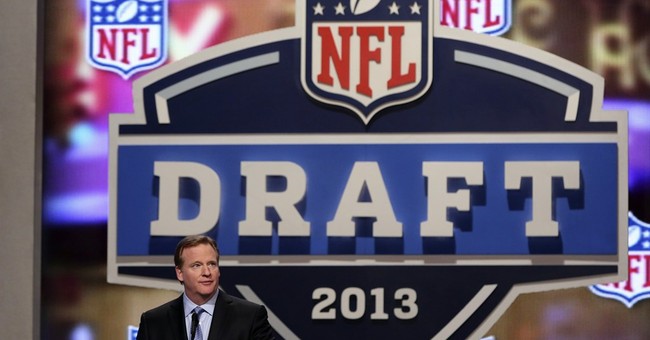 Alternate headline: America's most popular sport won't touch America's least popular law.  Go back and read this post from last week, which sets the table for why Obamacare proponents are reaching out to A-list celebrities and pro sports leagues to help convince young people to participate in the new health system.  Healthy young people are hit hardest by the law.  Here's Buzzfeed explaining the initial strategy:


The federal government is in the early stages of exploring possible partnerships with professional sports leagues as a way to promote insurance options under Obamacare. “The NFL, the NBA, and others were contacted by the administration,” a spokesman from the NFL told BuzzFeed in an email. “We have made no commitments nor discussed any details with administration officials. We are in the process of trying to clarify what it is the administration would propose. There is nothing further to report.” An MLB spokesman said the White House also contacted them to schedule a meeting, but the meeting was postponed.


Click through for details on how the sports-government healthcare PR nexus was pioneered in Massachusetts.  Senators Mitch McConnell and John Cornyn fired off a missive to the National Football League last week, urging them to spurn the Obama administration's advances on the issue:

The top two Republicans in the Senate released letters Friday urging the commissioners of the National Football League and other major sports leagues not to promote the 2010 health care overhaul law. “Given the divisiveness and persistent unpopularity of the bill, it is difficult to understand why an organization like yours would risk damaging its inclusive and apolitical brand by lending its name to a promotion,” wrote Minority Leader Mitch McConnell of Kentucky and Minority Whip John Cornyn of Texas in the letters, which were dated Thursday. “We have long been concerned by the Obama Administration’s record of using the threat of policy retaliation to solicit support for its policies or to silence its critics,” the two wrote.

Sure enough, the NFL has decided against going there.  The Washington Examiner's Phil Klein received the following statement from a league spokesman:

We have responded to the letters we received from members of Congress to inform them we currently have no plans to engage in this area and have had no substantive contact with the administration about PPACA’s implementation.


Additional reports indicate that MLB and the NHL have also said 'no thanks' to the prospect of promoting the president's polarizing law.  So for now, it looks like it's all up to librarians to reverse the "train wreck."  The best news in all of this is that sports fans can continue to hear this song without it triggering instant agitation over premium spikes, dropped coverage, layoffs, and massive deficits:

Damn Everyone to Hell: Here's An MSNBC Rant For the Ages
Townhall
Warriors issue really vague statement about part-owner who said no one cares about genocide in China
Twitchy
Democrats Begin Pushing a Major Elections Lie
Redstate
Street Artists on Both Coasts Take Aim at COVID Authoritarianism and the Lefties Can't Cope
PJ Media