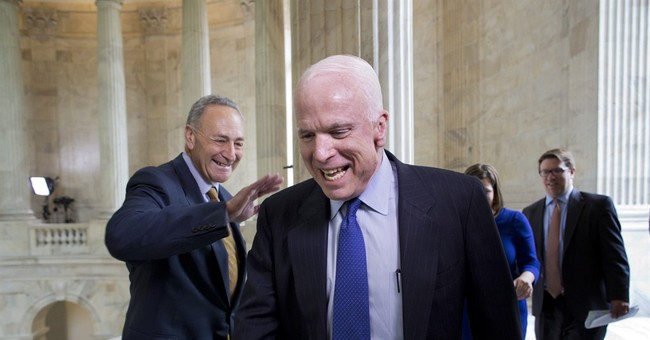 It's time for an object lesson on the credibility of Senators John McCain and Chuck Schumer on border security.  When Sen. John Cornyn introduced his minimally stringent enforcement amendment two-and-a-half weeks ago, it was hailed by many as a major "breakthrough." Sources close to the 'Gang of Eight' told me that initial indications suggested that Schumer was open to accepting the plan.  The excitement appears to have fizzled when President Obama quietly intervened, informing Schumer that Cornyn's central trigger was "unacceptable."  In a flash, the breakthrough became a "poison pill."   McCain and Schumer proceeded to launch a coordinated blitz against the amendment on the Senate floor the following week.  Their primary stated objections?  The proposal's misguided focus on a border patrol personnel-centric model (Cornyn wanted to add 10,000 new agents), plus the related costs.  Watch this colloquy, beginning with McCain's "questions" to Schumer, and ending with the New York Senator complaining that the price tag for adding so many new agents would be "through the roof:"

McCain and Schumer launched a coordinated attack from the floor last Wednesday. Their critique: the Cornyn plan called for 10,000 agents and would cost as much as $25 billion. Cornyn disputed both figures, but McCain and Schumer railed against the amendment for adding to the deficit and assuming that manpower could solve the problem. “The fact is that we can get this border secured, and the answer, my friends, as is proposed in the Cornyn amendment, that we hire 10,000 more border patrol is not a recognition of what we really need,” McCain said.


That was on June 12.  Just over a week later, both Senators are praising the Hoeven/Corker amendment -- which, presumably, has Obama's blessing.  Schumer pronounced himself "extremely enthusiastic" about the new deal in a floor speech yesterday afternoon.  What do Hoeven and Corker call for, among other things?  Roughly 20,000 new border patrol agents, double the "poison pill's" figure, which one can only assume would cost roughly twice as much as Cornyn's "through the roof" costs.   So what changed?   Was it the soon-to-be inoperative and outdated CBO score that allayed the Senators' deep concerns about costs (Schumer the fiscal hawk!), or are these men careening from one standard to another, fueled by raw political expediency?


UPDATE - Cornyn's office reaches out to clarify that their amendment only really called for 5,000 new agents, so the new "breakthrough" plan quadruples that figure.  Keep that in mind as you assess Schumer and McCain's previously-held concerns.