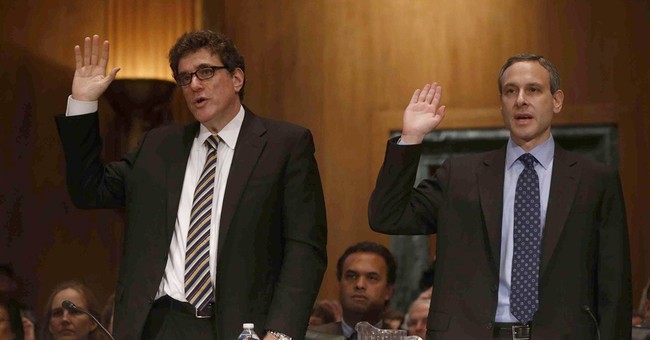 The House Oversight Committee has released partial transcripts of depositions taken from lower-level IRS employees in Cincinnati -- the very group of individuals being scapegoated by agency brass for the unfolding scandal.  Katie briefly touched on this earlier in an update, but it's worth some extra attention.  Here's one former IRS employee laying bare the partisan nature of the targeting:

Q: But you specifically recall that the BOLO terms included "Tea Party?"

A: That is correct.

Q: Was it your understanding that the purpose of the BOLO was to identify conservative groups?

Q: Was it your understanding that the purpose of the BOLO was to identify Republican groups?


Of course it was political.  The entire notion that this systemic abuse wasn't motivated by politics has never remotely passed the smell test, yet the IG report credulously advanced that assertion -- which was then parroted repeatedly by Mssrs. Shulman and Miller before Congress.  Set aside for a moment the documented political donation habits of IRS employees, and Stephen Miller's explicit admission that no liberal-leaning groups were ensnared by this trolling pattern.  Charles Krauthammer cuts through the nonsense with this concise analysis: "Two IRS chiefs (Steven Miller and Douglas Shulman) insisted that the singling-out of groups according to politics was in no way politically motivated. More hilarity. It’s definitional: If you discriminate according to politics, your discrimination is political. It’s a tautology, for God’s sake."  The subsequent excuse that homing in on conservatives was merely an efficiency-minded response to a glut of new applications has been debunked twice over.  First, the spike in applicants didn't start in 2010, when the targeting began.  In fact, applications were down that year. Second, the nature of the abuse created more work for the IRS, not less.  Hence the parade of intrusive questions, demands for mountains of documentation, etc., while the circle of inquiry kept expanding.  Anyway, back to the new report. The same employee (quoted above) goes on to explain why he or she decided to leave the IRS in 2010:


Q: Earlier I believe you informed us that the primary reason for applying for another job in July [2010] was because of the micromanagement from [Washington, DC, IRS Attorney], is that correct?

Q: Why didn't you want to be associated with it?

A: For what happened now.  I mean, rogue agent?  Even though I was taking all my direction from EO Technical [Washington, D.C], I didn't want my name in the paper for being this rogue agent for a project I had no control over.

Q: Did you think there was something inappropriate about what was happening in 2010?

A: Yes.  The inappropriateness was not processing these applications fairly and timely.


Kudos to this individual for quitting rather than going along with the plan; still, it's too bad he or she didn't blow the whistle on the inappropriate practices.  Another deposed agent says IRS investigations into conservative groups were directed, and at times micromanaged, from Washington:


Q: Did anyone else ever make a request that you send any cases to Washington?

Q: When was this, what time frame?

Q: But just to be clear, she told you the specific names of these applicants.

Q: And she told you that Washington, D.C. had requested these two specific applications be sent to D.C.

Q: Okay.  So she asked you to send particular parts of these applications.

Q: And that was unusual.  Did you say that?

Here we have evidence of DC-based higher-ups making special requests to handle specifically-identified and -named targeting cases.  Click through to read this informant reject outright the IRS' initial contention that the targeting program was the handiwork of two "rogue" agents.  Quote: "They [are] basically throwing us underneath the bus."  House investigators revealed over the weekend that at least 88 IRS officials appear to have had some hand in the wrongful targeting scandal.  But pay no heed to the emergence of these damaging details, America.  What's really important is "Republican overreach," or something.  I'll leave you with this: