Time for Another Report About Democrats' Growing Obamacare Panic 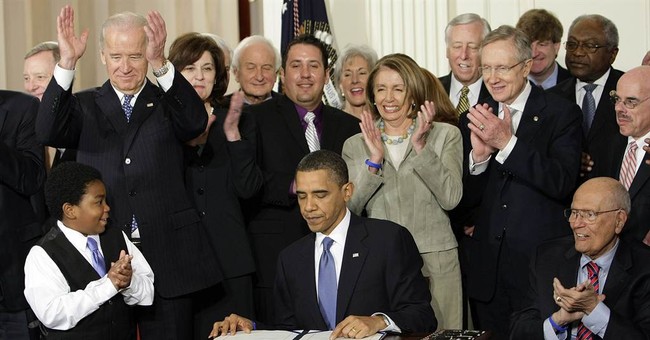 The noticeable proliferation of "Democrats fret over Obamacare" stories in the mainstream media points to something other than a simple manifestation of liberal self-flagellation.  These pieces are warnings: Get your act together, Democrats, or Republicans might win next year.   Here's the latest installment from the New York Times:


As the administration struggles to put in place the final, complex piece of President Obama’s signature health care law, an endeavor on a scale not seen since Medicare’s creation nearly a half-century ago, Democrats are worried that major snags will be exploited by Republicans in next year’s midterm elections. Many Democrats also want to see a more aggressive and visible president to push the law across the country. This week Mr. Obama is returning to the fray to an extent unseen since he signed the law in 2010, including a White House event on Friday to promote the law’s benefits for women, the first in a series of appearances for health care this year. A number of health insurance changes have already taken place, but this fall, just as the 2014 election season heats up, is the deadline for introducing the law’s core feature: the insurance marketplaces, known as exchanges, where millions of uninsured Americans can buy coverage, with subsidies for many.


Yes, because highly "visible" speechifying from the president has been such a boon to this cause in the past.  In any case, the introduction of central changes in 2014 puts the lie to the president's recent assertion that the Obamacare process is already over for up to "90 percent" of Americans.  It's next year's implementation, which promises to be messy, that continues to stir Democratic jitters:

For the third time, Republicans are trying to make the law perhaps the biggest issue of the elections, and are preparing to exploit every problem that arises. After many unsuccessful efforts to repeal the law, the Republican-led House plans another vote soon. And Republican governors or legislatures in many states are balking at participating, leaving Washington responsible for the marketplaces. Democrats are worried about 2014 — a president’s party typically loses seats in midterm years — and some have gone public with concerns about the pace of carrying out the law. Senator Harry Reid of Nevada, the majority leader, told an interviewer last week that he agreed with a recent comment by Senator Max Baucus of Montana, a Democratic architect of the law, who said “a train wreck” could occur this fall if preparations fell short. The White House has allayed some worries, with briefings for Democrats about their public education plans, including PowerPoint presentations that show areas with target populations down to the block level. “There’s clearly some concern” among Democrats “that their constituents don’t yet have all facts on how it will work, and that Republicans are filling that vacuum with partisan talking points,”said Representative Steve Israel of New York, head of the House Democrats’ campaign committee. “And the administration must use every tool they have to get around the obstructions and make it work.”


Democrats can continue to console themselves with the delusion that their biggest problem stems from public ignorance.  In reality, their electoral pain will come from people who do understand the law and who've fought it at every turn since 2009.  Demanding more money to sell the law only inflames public concerns over the already-massive cost of the program, and has zero chance of passing Congress anyway.  But even if those funds were provided, one can only dress up a failure for so long.  The quote above from DCCC chair Steve Israel is particularly amusing.  He's very upset with Republicans for filling the imagined public information void with "partisan talking points," presumably designed to trick people into believing the law is a mess.  Damn those Republican operatives who've called Obamacare implementation a "huge train wreck," likened the roll-out to a "third world experience" for the American people, asserted that the "Affordable" Care Act doesn't actually contain costs, and spread rumors that the law is contributing to -- not reducing -- rising premiums.  Oops.  Obamacare's problem isn't Republican talking points, which have proven rather toothless on any number of fronts recently.  Obamacare's problem is Obamacare, which is why the chorus of Democrats publicly voicing concerns is growing louder.  I'll leave you with two reminders:

(1) Obamacare is still being written, as evidenced by the growing anti-freedom tower.  From today's Times piece: "Essential regulations remain unresolved, leaving insurers, small businesses and health care providers unsure of how to proceed."

(2) A core element of Obamacare is a huge expansion of Medicaid, an existing program that is already financially unsustainable, has generated increasing access hurdles, and has been demonstrated to be a substantive failure on health outcomes by a comprehensive, nonpartisan study.  MIT economist Jon Gruber -- who helped design Obamacare, including the Medicaid expansion -- has now separately concluded that Medicaid doesn't work.  But let's swell its rolls by 11 million people anyway.
UPDATE - CNBC reminds us that the IRS will be the "key enforcers" of the law, once the mandate tax takes effect next year.