Team Brewer, obviously, but what prompted this confrontation on a Phoenix tarmac? 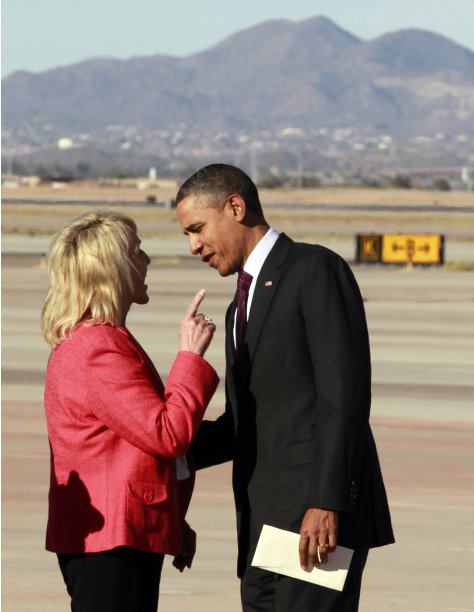 Drudge had the scoop last night:

"He was a little disturbed about my book, Scorpions for Breakfast. I said to him that I have all the respect in the world for the office of the president. The book is what the book is. I asked him if he read the book. He said he read the excerpt. So." Asked what aspect of the book disturbed him, Brewer said: "That he didn't feel that I had treated him cordially. I said I was sorry he felt that way but I didn't get my sentence finished. Anyway, we're glad he's here. I'll regroup."

She said the president brought up the book. "I thought we probably would've talked about the things that were important to him and important to me, helping one another. Our country is upside down. Arizona was upside down. But we have turned it around. I know again that he loves this country and I love this country." It was clear from the moment they greeted one another that this would not be a run-of-the-mill encounter between the president and a local official. At one point, she was pointing her finger at him and at another, they were talking at the same time, seemingly over each other. He appeared to walk away from her while they were still talking, and she confirmed that by saying she didn't finish her sentence.


Let's see...Obama wasn't satisfied to merely demonize Brewer's state for trying to pick up the feds' slack on the glaring illegal immigration problem, his Attorney General actually sued them over it.  Oh, and his administration added fuel to this fire with their astonishingly ill-conceived and lethal 'fast and furious' debacle, then tried to shift the blame.  Yet the smartest man alive apparently can't understand why Arizona's Republican Governor didn't portray him as a superhero in her book.  Allahpundit flags the passage that evidently irked The One:

“It was though President Obama thought he could lecture me, and I would learn at his knee,” the governor wrote, calling his tone “patronizing.” “He thinks he can humor me and then get rid of me,” Brewer wrote.  Questioned about the different description, the governor said she did not lie. “I mean, we weren’t yelling at one another, screaming at one another,” she said.  “But it was a pretty one-sided conversation,” Brewer said. “He was, I believe, condescending. And he was lecturing me about what we were going to do and how we were going to do it.”


Barack Obama was condescending, hectoring, and patronizing toward an elected Repubican?  Gee.  In his defense, maybe he was just wee-wee'd up over the fact that Brewer waltzed to a double-digit re-election victory in 2010, largely because she stood up to his White House to defend a law that Arizonans overwhelmingly support.  Popularity has been scarce for our president over the last few years, so this could be a manifestation of job approval envy.  Speaking of popular Republican governorns of states with large Hispanic populations, former Florida Governor Jeb Bush pens an important Op/Ed in the Washington Post today, offering a GOP road map to attracting Latino voters:

First, we need to recognize this is not a monochromatic community but, rather, a deeply diverse one. Hispanics in this country include Mexicans, Puerto Ricans, Cubans and many others. Some came here 50 years ago to make a better life; others came last year. Some have lots of education, some have none. The traditional Republican emphasis on the importance of the individual has never been more relevant. Nevertheless, there are common features and dreams across this community. Hispanics understand, either personally or through close family members, what it means to come here as an immigrant. They know how hard it is to function without a full working knowledge of English. They have often felt the sting of prejudice and the threats of gang violence. They tire of the stereotypes built by the media and some politicians. Like all voters, Hispanics respond to candidates who show respect and understanding for their experiences.


That's just the first piece of a four-step recipe.  His guidelines won't be everyone's cup of tea, but this is an issue of basic demography and isn't going away.  Read the whole thing, and keep in mind that Bush sailed to a second term in 2002, in part, by capturing a sizable majority of the Hispanic vote.  He's lived this; at least hear him out.


UPDATE - I wonder if Obama and Brewer discussed this little development all.  Round two, perhaps?