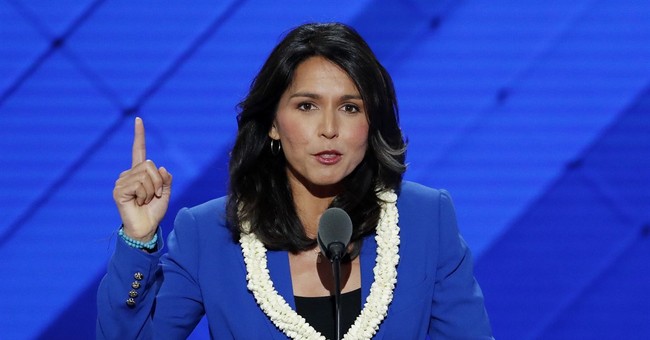 Donald Trump has kept busy in his first few weeks on the job. He has met with several notable Republicans. His picks for top White House positions are sparking conversation and concern amongst the Democratic leadership.

This is why his latest meeting is such an interesting pick.

According to reports from The Hill and CNN, Donald Trump is meeting with Tulsi Gabbard today. Gabbard, a congresswoman from Hawaii, is a staunch democrat. She was a fervent Bernie Sanders supporters, though she did vote for Clinton when Sanders lost the primary.

My friends, because this is a movement fueled by love, it can never be stopped or defeated. #FeelTheBern #DemsInPhilly

Though there is no official report on what the two will speaking about, there are rumors that it may be for a position in the Trump administration. Representative Marsha Blackburn hinted about certain appointments the President-elect may be making, saying, “Mr. Trump is going to have women that are in those top levels of responsibility. He’s going to have women that know how to get things done to achieve the goals and to deliver the product the American people want.” Most suspected that Kellyanne Conway, Nikki Haley, Kelly Ayotte, and Laura Ingraham were the most likely female candidates for a Trump appointment.

Gabbard’s appointment would be shock. Many other notable democrats are preparing for war with the Trump administration, including Bernie Sanders. Gabbard is pro-choice and has a “100% voting record with both Planned Parenthood and NARAL.” This would pit her against Trump’s campaign promise to elect a pro-life SCOTUS judge, and Mike Pence.

However, there may be more areas were Gabbard and Trump could agree. According to The Hill, “Stephen Bannon is reportedly a big fan of Gabbard because of her right-leaning stances on guns, refugees and Islamic extremism.” Gabbard supports the Second amendment, though she has voted to restrict gun ownership for those on the “No-Fly” list, which many conservative find to be an arbitrary determinate. Gabbard’s stance on the war against ISIS and the civil war in Syria emphasizes a military and ideological offensive against ISIS, while staying out of conflict generated by the Assad regime. Trump’s opinion is quite similar. A New York Times reporter tweeted that Gabbard is being considered as the UN ambassador. Trump’s and Gabbard’s similar views regarding Syria and ISIS would make Gabbard a useful ambassador, since the UN’s Security Council is still determining how the international community should intervene.

As surprising as Gabbard’s possible appointment may be, it could start to unify the country. Many democrats feel shut out of the government because Republicans control both chambers and the White House. There is a new Gallop poll that shows 77 percent of Americans feel that the country is deeply divided, The Hill reports. Inviting a democrat to work alongside the Trump administration would prove that bipartisanship is possible in this deeply divisive time.