Nikki Haley To Meet With Trump Tomorrow, Eyed As Secretary Of State 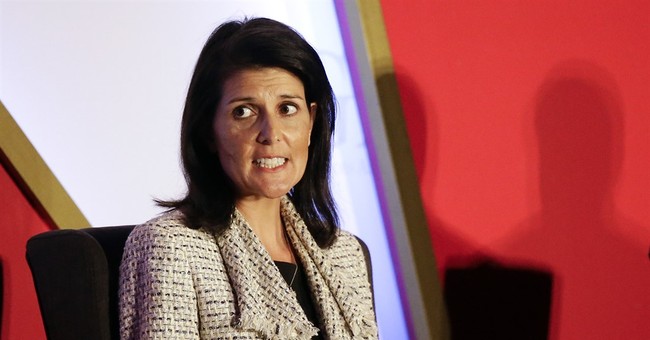 CNN’s Jim Acosta is reporting that South Carolina Governor Nikki Haley is expected to meet with President-elect Donald Trump on a possible position in his White House as secretary of state. Former New York City Mayor Rudy Giuliani is said to be the frontrunner for the position, but The New York Times’ Maggie Haberman noted that we probably should talk everything with a grain of salt since Trump is said to be drafting his own list—separate from the transition team—for cabinet positions. She also added that this palace intrigue is part of Trump’s demeanor concerning being in control of things, so let’s see how this plays out.

Gov. Haley did not support Trump during the GOP primaries; she backed Sen. Marco Rubio (R-FL). In October, she finally said that she was voting for Donald Trump. Yet, prior to the Election Day, reconciliation was said to have happened, though there will be questions about her qualifications for such a top post. South Carolina’s Lt. Gov. Henry McMaster is also being considered for attorney general (via The Post and Courier):

CNN able to confirm Gov Nikki Haley being looked at for Sec of State as well as other cabinet positions. She meets with Trump tomorrow

Haley, who is in her second and final term as governor, has clashed with Trump over some of his foreign policy proposals, notably a temporary ban on Muslims entering the country. But the pair apparently have repaired their relationship as Haley voiced support for Trump as Election Day approached.

Calls to Haley's media spokesmen were not immediately returned Wednesday. A Trump spokesman also did not respond to phone and text messages asking for comment.

Trump sources in South Carolina recognized there has been a healing since the heated primary season.

“We appreciate what she did for Donald Trump in the campaign,” said Ed McMullen, who was South Carolina chairman and a national adviser for the Trump campaign.

"Secretary of state is going to be a bit of a stretch for Haley's area of expertise," she said, adding that Haley has yet to be vetted about foreign policy, trade and protectionism.

Newsom Seeks to Delete Law That Makes it a Crime to Kill a Baby After It's Born
Townhall
Financial wiz says the drop in the stock market 'literally means nothing' to the average American
Twitchy
Jill Biden's Latest Fashion Disaster Has People Talking, but It Shows a Deeper Issue
Redstate
Parents and Students Protest Transgender Teacher With Huge Fake Breasts
PJ Media