ESPN Host: Kaepernick’s Decision to Not Vote is ‘Egregious to the Highest Order’ 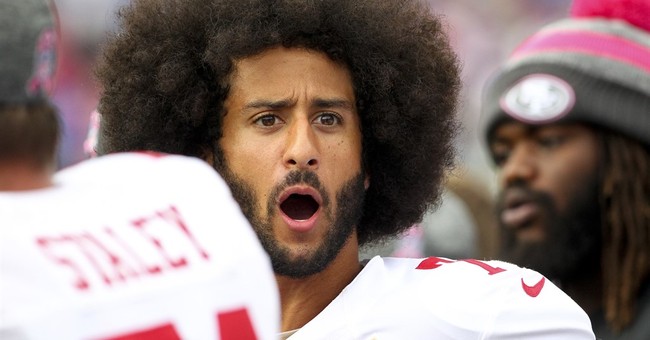 Stephen A. Smith, a commentator on ESPN’s “First Take,” took aim at Colin Kaepernick on Saturday after the 49ers quarterback announced that he did not vote in the recent election.

Kaepernick revealed his lack of political participation back in early November, telling reporters, “You know, I think it would be hypocritical of me to vote. I said from the beginning I was against oppression, I was against the system of oppression. I'm not going to show support for that system. And to me, the oppressor isn't going to allow you to vote your way out of your oppression."

Smith told CNN that he had originally defended Kaepernick’s decision to kneel during the national anthem.

"The fact is he had every right to protest and when he was talking about racial injustices and things of that nature, you certainly can understand where he was coming from. It was a quiet protest. He didn't impede anybody's ability to watch the games or come to the games or anything like that which is why I went on 'Good Morning America,' my show 'First Take' and other outlets to support him," he explained.

However, Smith went on to say that he simply cannot defend Kaepernick’s decision not to vote, saying it is “egregious to the highest order” (via CNN):

“I thought it compromised everything that he was standing for...and more importantly I thought it was a disrespect to our ancestors, to people who have bled and fought and died for him to have the right to do that.”

…Kaepernick’s lack of participation in the election had “obliterated every argument he was trying to make.”

“I'm not saying his arguments have no credence whatsoever,” he explained.

“I'm saying that he himself compromised his own message and because of that I don't want to listen to him anymore because the number one tool that we have in America to provoke change is our power to vote. It's something that we fought for. It's something that was exacted to us in 1964/1965. How in god's name can you sit up there and justify not voting?” he said.

Smith concluded, saying, “I'm not letting him get a pass on that. I'm just not.”

Despite all the controversy, it looks like the 49ers will welcome Kaepernick back with open arms in 2017. While Kaepernick still plans to void his contract before the ‘league year’ ends, he will likely rejoin the team - just with a better contract in place, this time. According to the NFL, “the once-strained relationship between the franchise and the quarterback is in a very good place.”