Donald Trump on the Issues 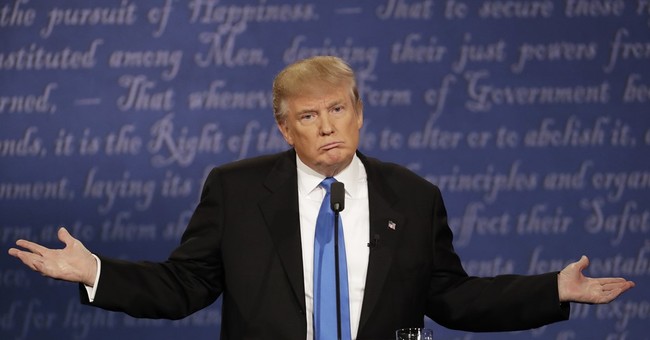 After months of campaigning, and even after last night’s debate, people still aren’t sure of where Donald Trump stands on some of the issues. According to Google, people are most curious—or maybe concerned— about Trump’s stance on these five topics: immigration, abortion, guns, education, and taxes.

Here’s what he has to say.

Trump has had a strict immigration policy from the beginning.

During the same interview, though, Trump said he would be open to “softening” his immigration stance. Unsurprisingly, the new rhetoric didn't last long.

“This election is our last chance to secure the border, stop illegal immigration, and reform our laws to make your life better," Trump said in Phoenix, Arizona a week later on August 31.

And of course, there’s the wall.

"We will build a great wall along the southern border," Trump said during the same speech. ”And Mexico will pay for the wall.”

Well, he doesn’t seem to be 100% sure on this one. Before running for president, Trump was pro-choice. After announcing his candidacy, Trump became pro-life—kind of.

On April 21, Savannah Guthrie on The Today Show asked Trump about his abortion stance.

"Yes, I would. Yes, I would. Absolutely," Trump answered. "For the three exceptions [rape, incest, and endangering the life of the mother], I would.”

Although, in recent weeks, Trump has begun to toughen up on his anti-abortion stance. On September 16, Trump outlined his pro-life platform, and emphasized his commitment to appointing a pro-life Supreme Court justice. He also mentioned permanently banning any taxpayer funding of abortion.

Trump has fiercely defended the Second Amendment and the right to bear arms, and on May 20, he won the NRA’s endorsement. Trump has repeatedly called out Hillary for wanting to strip Americans of their gun rights and their right to defend themselves.

However, last night, Trump and Hillary actually agreed on one point when it came to guns. “We have to look very strongly at no-fly lists,” said Trump. “I tend to agree with that.”

In one of his earlier ads, Trump asserts that he is a “tremendous believer in education, but education has to be at a local level.” Trump hopes to do this by giving states a $20 billion federal investment towards school choice. The investment will be in the form of block grants, so they can decide where the money should go.

“My tax cut is the biggest since Ronald Reagan” he mentioned later. “I’m very proud of it. It will create tremendous numbers of new jobs.” He then called out Hillary, saying “but regulations, you are going to regulate these businesses out of existence.”