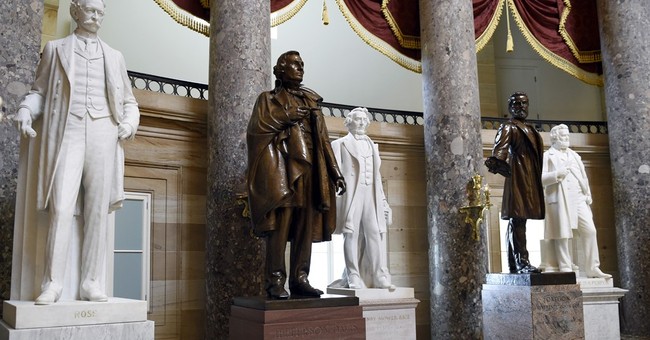 Last week, a new statue was added to National Statuary Hall, that of scientist and inventor Thomas Edison. The statue was a gift from Ohio. Each state is allowed to donate two statues, meaning the collection consist of 100 pieces. Because of space issues, only 35 statues are actually located in National Statuary Hall, including Edison. The rest are on display throughout the U.S. Capitol building. Here are some of the most interesting faces to look out for.

Dedicated by Florida in 1914

Gorrie, a physician and scientist, is considered the father of two very important inventions—refrigeration and air-conditioning.

Dedicated by Georgia in 1926

Located in the Crypt

Long was the first to recognize the effects of ether in surgery. In other words, he discovered anesthesia.

Dedicated by Hawaii in 1969

Kamehameha I is credited with unifying all of the islands of Hawaii. His statue is also the heaviest in the collection and weighs over six tons. That’s quite a lot of rock and metal.

Dedicated by Montana in 1985

Rankin was the first woman to serve in the U.S. Congress, specifically the House of Representatives. She also helped pass the 19th Amendment. Despite all this, she wasn’t the first woman statue in the National Statuary Collection. That honor belongs to Frances Willard, who was dedicated in 1905 by Illinois.

Farnsworth is known as the “Father of Television,” for his invention of the first fully functional all-electronic television system, which included an "image dissector,” or what we would call a video camera tube.

Dedicated by Wyoming in 2000

Washakie is one of the most respected leaders in Native American history, and is the only known Native American to be given a full military funeral. Despite this, Sequoyah, not Washakie, received the first statue in the collection to honor a Native American. The Sequoyah statue was donated by Oklahoma in 1917.

Borlaug is know as "the father of the Green Revolution” for his efforts to feed the world. He is credited with savings hundreds of million of lives, and has earned several awards for his work, including the Nobel Peace Prize in 1970, the Presidential Medal of Freedom in 1977, and the Congressional Gold Medal in 2007.

A complete list of the National Statuary Hall collection can be found here.