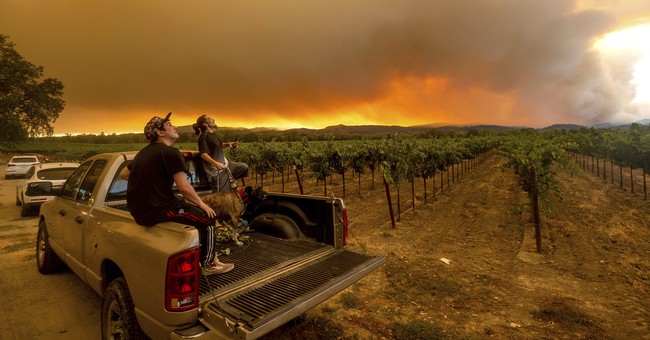 The smoke from deadly wildfires that have burned for weeks on the West Coast has settled on the other side of the country, hanging over cities as far east as New York City and Washington, D.C.

More than 4 million acres have burned across ten states ranging from the Pacific Ocean to the southwest, as haunting images of orange skies in San Francisco and smoke-laden streets in Portland flood headline news. But the smoke is so intense from the western part of the country, that haze has ventured all the way to the Atlantic seaboard including the Big Apple and the nation's capital.

"Widespread haze is likely today in NYC, as a plume of wildfire smoke from Western US wildfires moves overhead," NY Metro Weather said in a tweet. "The smoke will remain elevated between 15,000 and 20,000 feet above our heads, as visualized by this vertical cross section."

Widespread haze is likely today in NYC, as a plume of wildfire smoke from Western US wildfires moves overhead. The smoke will remain elevated between 15,000 and 20,000 feet above our heads, as visualized by this vertical cross section. pic.twitter.com/ZTmJYfOymw

Unlike the West Coast, however, effects from the smoke on the East were not expected to reduce air quality. However, those in the Northeast or Mid-Atlantic are likely blocked from the full view of the sun as the haze sits high above the cloud line. Cooler temperatures are also expected in the East as a result of the smoke.

The long-reaching impact of the devastating wildfires is reminiscent of the tragic Dust Bowl in the 1930s, in which a series of droughts met with deep plowing of topsoil in the Mid-West caused devastating clouds of dust to roll across the country. The dust clouds sometimes blacked out the sun entirely and dust reached both New York City and Washington, D.C. as a result.

Like the Dust Bowl, the wildfires have been exacerbated by drought conditions on the West Coast, which have combined with more than a century of fire suppression to give the roaring flames an almost infinite amount of forest fuel.

Scientists have pointed out that the lack of controlled burn in heavily wooded areas where there is drought has led to the stunning level of devastation. Environmental groups and Democrat politicians have advocated against logging and controlled burns for decades, saying that wildlife habitats and endangered species were at risk.

Policies enacted as a result of environmental lobbying have stopped any interference in dead, drying wooded areas, giving the fire the power to destroy at unprecedented levels. In addition to the loss of millions of acres including homes, farms, and businesses, 35 people have lost their lives in the wildfires thus far. It is not known how many endangered species and natural habitats have been burned.

The smoke plume, 4-5 thousand miles across, is spoiling what would otherwise be sparkling, sunny September days in DC, Maryland, and Virginia. But it's high enough that it's not affecting air quality. https://t.co/E4mYOXixdo