'Proof That Joe Biden Is an Empty Shell': Trump Campaign Reacts to Harris as VP Pick 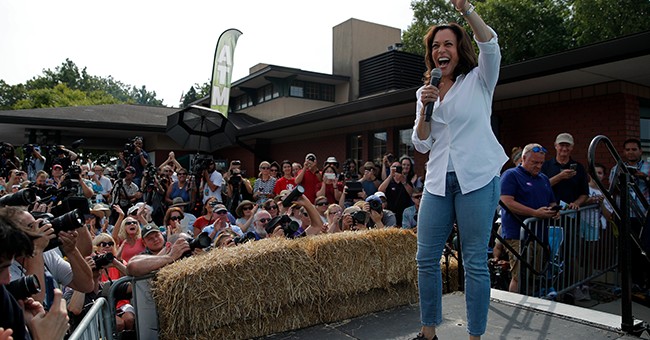 The Trump campaign for reelection wasted no time reacting to Team Biden's announcement that Sen. Kamala Harris had been chosen to join the former vice president in his bid for the White House.

In a statement posted to Twitter by campaign Director of Communications Tim Murtaugh, the team expressed little surprise that Biden had tapped Harris as his potential VP. The statement, written by senior campaign adviser Katrina Pierson, excoriated Harris for her record of supporting far-left policies, advocating for ludicrous tax hikes, and backing down from her accusations of racism against Biden.

"Not long ago, Kamala Harris called Joe Biden a racist and asked for an apology she never received. Clearly, Phony Kamala will abandon her own morals, as well as try to bury her record as a prosecutor, in order to appease the anti-police extremists controlling the Democrat Party. In her failed attempt at running for president, Kamala Harris gleefully embraced the left’s radical manifesto, calling for trillions of dollars in new taxes and backing Bernie Sanders’ government takeover of healthcare. She is proof that Joe Biden is an empty shell being filled with the extreme agenda of the radicals on the left.

“Joe Biden is no moderate, and with Harris as his ‘political living will,’ he is surrendering control of our nation to the radical mob with promises to raise taxes, cut police funding, kill energy jobs, open our borders, and appease socialist dictators. At the ballot box, Americans will resoundingly reject the abysmal failures of Biden-Harris in favor of the America First strength of President Donald Trump and Vice President Mike Pence."

The selection of Harris by Biden raised eyebrows on both sides of the aisle as the two Democrats had multiple fiery exchanges during the early days of the campaign trail when Harris was still seeking the top job. Harris accused Biden of associating with racist senators and supporting education policies that segregated children based on the color of their skin. She painfully described how those policies personally touched her own life, famously coining the phrase, "that little girl was me," which became a popular t-shirt during her bid for the presidency.

As pointed out by the Trump campaign, Biden has not apologized for the policies that Harris so vehemently condemned at the time.

Harris has also been the subject of intense criticism by the voices on the left and right who find her history as a prosecutor in California to have been overly aggressive, putting many Black Americans in jail for long sentences over minor offenses.

Harris backed Biden immediately after dropping out of the race earlier this year and has not rehashed her prior concerns that led to animosity on the debate stage. Both Sen. Harris and Biden are expected to make speeches about the announcement on Wednesday. The Trump campaign released a short video slamming both candidates a short time after the statement, underlining their use of the name, "Phony Kamala."