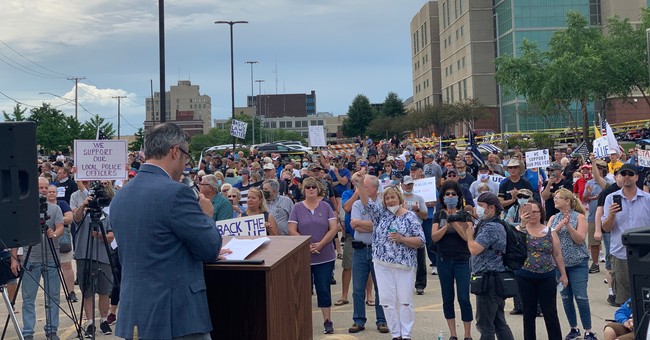 As the media continue to grapple with the definition of "peaceful" in their coverage of protests, riots, and destruction across U.S. cities, some Americans have taken the time to speak out in defense of actual officers of the peace. But their efforts are much harder to find in headline news.

One such event, Back The Blue, took place this weekend in Rockford, Illinois, about 90 miles west of Chicago. More than 500 people gathered on Saturday to voice their concerns over the national rhetoric against policemen and women. Steps from the Winnebego County Criminal Justice Center, voices chanted "back the blue," and "we love the blue" as speakers gave praise to law enforcement.

The emcee of the planned event, conservative radio host Michael Koolidge of The Michael Koolidge Show on WROK, said the Back The Blue rally wasn't about posturing as opposition to the anti-police movement trying to drown them out less than a block away; it was about sharing a message of love.

"Our rally was about love, unity, and peace, and local law enforcement keeps the peace, and that is who and what we support – good police officers not just in our community but across the country," Koolidge told Townhall. "The fact that over 500 people came out to support this cause during a time when various protests for other causes throughout the country have resulted in a lot of violence, destruction, and mayhem, says a lot, I think. People want to stand for something positive and most importantly unifying, and that's definitely what our rally was about."

In addition to hundreds of signs hoisted by the rally-goers with encouragement for law enforcement, messages of patriotism, American flags, and Thin Blue Line flags waved proudly. The event concluded with the 500-strong crowd singing God Bless America and our national anthem, drowning out the jeers of anti-police protesters behind them.

While Back the Blue gathered peacefully to bolster a deflated police force on Saturday, counter-protesters were not easily dissuaded from their months-long battle against the police. Members of antifa, Black Lives Matter, and other radical leftists hurled obscenities at the large crowd, but their cutting words of division were easily drowned out by the much larger pro-police, pro-peace rally, Koolidge said.

Proving their intentions were beyond just a counter-protest, the approximately 75 people who gathered to silence Back the Blue lingered after the rally dispersed, only to get into physical altercations with officers later on. Six were arrested on Saturday following at least 11 arrests for disturbance of the peace on Friday night, according to local law enforcement.

Koolidge, who noted the turnout was much larger than he imagined, felt spiritually bolstered by the experience and hoped to see many similar demonstrations in the coming days.

"My hope is that people who support the promotion of peace, love, and unity, stand up for this ideal. Police morale is at an all-time low right now," the emcee told Townhall. "They need to know that the vast majority of Americans support them. And I just want to point out that this isn’t about being ‘anti’ anything in particular or responding to any other movement or cause. It is entirely its own message, and that is this: We support all good police officers. We Back The Blue."