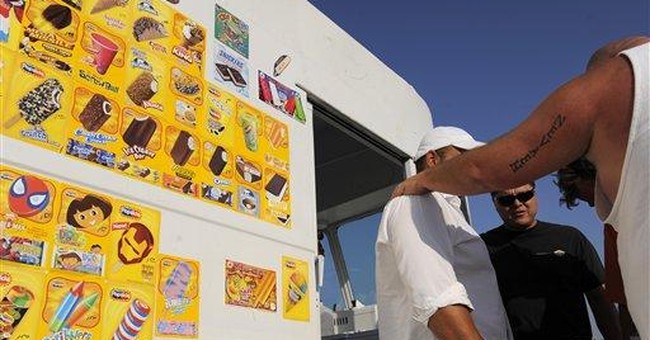 The "Eskimo Pie" ice cream treat will be rebranding itself after nearly 100 years of being a childhood favorite. The bar of ice cream dipped in chocolate has become just the latest victim of the forest fire of cultural policing perpetuated by the left.

In the race to see which brand people forgot about is the wokest... Eskimo Pies is renaming itself.

The dessert was invented in the early 1920s when a young boy in Iowa could not decide to buy ice cream or a chocolate bar with his nickel. The ice cream bar was first called "I Scream" until a slight branding change in its early life associated the frosty treat with the frozen lands of far away territories like Alaska and Russia.

The popular song, "You Scream, I Scream, We all Scream for Ice Cream!" was often associated with the chocolate bar as it also associated people living in cold regions with cold, sweet treats. But its innocent history and jovial connotations could not save it from the axe of wokeness. Dreyer's, like so many other companies and organizations, has now vowed to solve racism with their branding decision.

"We are committed to being a part of the solution on racial equality, and recognize the term is derogatory,” said a company statement. “This move is part of a larger review to ensure our company and brands reflect our people values."

Eskimo Pie is “offensive” now? Did anyone ask actual Eskimos, or was it another boardroom full of dull, perpetually unhappy, guilt-ridden white Libs?

#EskimoPie I am Alaskan Native (Eskimo) originally from Kaktovik Alaska, and I am offended that they are appeasing the cancel-culture idiots! Keep the name and don't bow down! I bet the ones complaining are not even Eskimo! #SuperficialChangeIsNotChange

Name even one person who truly associates it this way. https://t.co/KRXsetcGGT

Aunt Jemima's recent name change was also not celebrated by all, particularly not by the family of a long time Quaker Foods employee and spokeswoman for the syrup. Vera Harris said her cousin, Lillian Richard, worked for more than 20 years as the face of the pancake syrup beginning in the 1920s. It was an honest job that made her a hero in her home state of Texas, Harris said.

"We want the world to know that our cousin Lillian was one of the Aunt Jemima's and she made an honest living," Harris said after Quaker announced the name change. "We would ask that you reconsider just wiping all that away. There wasn't a lot of jobs, especially for black women back in that time."

"I wish we would take a breath and not just get rid of everything, because good or bad, it is our history," Harris also said. "Removing that wipes away a part of me. A part of each of us. We are proud of our cousin."

An earlier representative of the Aunt Jemima brand was defended by her great-grandson after he learned about the decision to dissolve the brand.

"This is an injustice for me and my family. This is part of my history, sir," said Larnell Evans Sr, the great-grandson of Anna Short Harrington. "The racism they talk about, using images from slavery, that comes from the other side — white people. This company profits off images of our slavery. And their answer is to erase my great-grandmother's history. A black female. … It hurts."