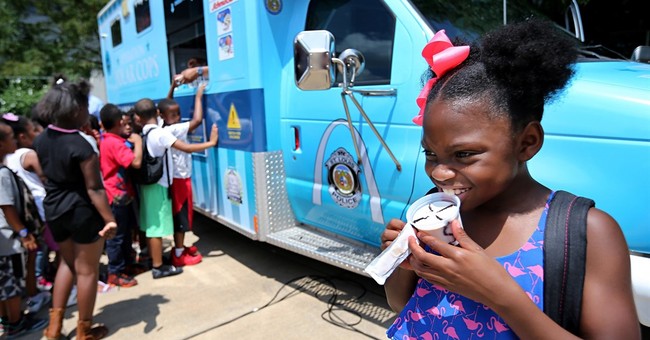 An overly ambitious "investigative journalist" working the Chicago, Illinois area called on his readers to dial 9-1-1 if they spotted a state lockdown-violating ice cream man in an affluent suburb.

"No gloves? No Mask? No problem," said Brad Edwards of CBS Chicago via Twitter on Friday. "This ice cream man is not only ignoring COVID-19 protocol, but he's breaking the law." Edwards noted that not only was the ice cream man defying a hotly contested statewide order but, the Village of Hoffman Estates also had a community ban on ice cream trucks.

"Such trucks are forbidden [by] Hoffman Estates, Edwards said. "The Village Manager says if you see him, call 9-1-1." The manager, James Norris, announced his retirement this week.

No gloves? No Mask? No problem. This ice cream man is not only ignoring COVID-19 protocol, but he's breaking the law. Such trucks are forbidden Hoffman Estates. The Village Manager says if you see him, call 9-1-1. @cbschicago pic.twitter.com/ebQftLpCUD

Edwards, ripping the lid off of the story of the rogue, rule-breaking ice cream man, charges the subject of his story with "enticing children" to visit his truck of frozen treats.

"Keeping kids cooped up is no easy task," the reporter says. "Add to that an enticement – one that is not only unsafe, but illegal."

The condemning report of a man who is only referred to in print as famed Batman villain, "Mr. Freeze," shows another CBS Chicago reporter approach the errant ice cream truck to interrogate the driver about his egregious act of selling ice cream during a pandemic.

"You think it’s a good idea to be doing this with the stay-at-home order?" Bicycle reporter Greg Kelly asked the ice cream man while pointing a camera inside the truck. "Why aren't you wearing a mask?" Seeing that an attempt to run his small ice cream business was about to turn confrontational with the self-deputized reporter, "Mr. Freeze" defended himself.

"Why are you trying to take ice cream out of the hands of children? Are you sick?" he questioned the reporter. "I’m not sick either. Why are they quarantining healthy people? There’s not any law."

Oh, but there is a law, Edwards notes in stark rebuke to the ice cream man's claim of innocence. Illinois governor JB Pritzker said this week that masks are required at times where six-feet of space between people is not possible.

"At this time, face coverings are required in public situations where social distancing cannot be maintained," Pritzker said. The state is still under strict stay-at-home guidelines that dictate all "nonessential business" be closed. With more than 30 millions Americans out of work because of the pandemic-induced lockdowns, citizens across the state of Illinois are demanding a faster return to business as usual. Re-open Illinois protests have raged in Chicago and the capital city of Springfield throughout the beginning of May.

To Edwards, however, who covers a massive American city with one of the highest homicide rates in the country, a lone ice cream man attempting to bring treats and cheer to children in the suburbs was lawlessness gone too far.

"All of this happened in Hoffman Estates, where we learned ice cream trucks are banned and have been for years," Edwards said with incredulity. "The Hoffman Estates village manager said if you see the ice cream man there, call 9-1-1."

Edwards' report caught the attention of readers across the nation on Friday, but not in a way that bolstered his reputation for fearless investigation.

Call 9-1-1 because an ICE CREAM MAN IS SELLING ICE CREAM?

You are grotesque. Remove this.

53 people killed in Chicago the month of April and you hunt ice cream man.