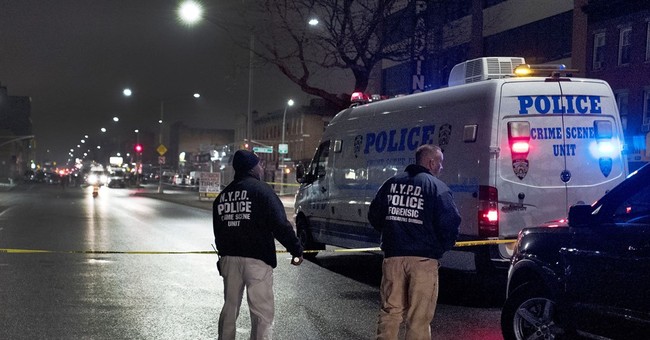 Things got way out of hand in New York City over the weekend when police officers confronted pedestrians on an East Village sidewalk for not observing social distancing protocols. Several police officers became physical when two surprised civilians who were told to disperse and chose to stay where they were. Bystanders watched as a man and woman were forcibly pushed onto the sidewalk in handcuffs and another man was beaten after an officer claims he presented a "fighting stance." Several videos made the jump to social media shortly after the Saturday incident.

Video shows officers approach two individuals standing close to a storefront on a busy street and demand that they leave. While the exchange between the police and the civilians is not totally audible, it's clear that there is strong disagreement. Bystanders can be heard yelling at the officers to stop and after a young man is seen handcuffed and face down on the sidewalk while a woman screams for the officers to stop. After another man approaches the scene, an officer with a crackling taser turns to charge after him.

"Move the f—k back right now!" The officer demanded of a bystander while pointing his taser at him. "What you flexing for? "Don’t flex." After holstering the taser, the officer pursued and then repeatedly struck the man with blows to the face and upper body.

"It started out as a social distancing enforcement." – NYC Police Commissioner Dermot Shea

Subsequent reports from the incident revealed that the two people initially approached by police were charged with misdemeanor violations including carrying an unapproved stun gun and possession of marijuana. They were confronted with a request to disperse due to social distancing guidelines and when they refused, officers discovered the contraband that constituted minor criminal charges.

Charges of resisting arrest, menacing, and assaulting a police officer were made against 33-year-old Donni Wright, the "flexing" bystander who was beaten by the taser-wielding officer.

The Manhattan District Attorney opted on Monday to defer charges against Wright. A spokesperson from the DA's office said an investigation into the incident would be needed before they could continue with prosecution. The NYPD officer involved in the incident, Officer Francisco Garcia, has been placed on "modified assignment" as internal and external investigations into the violent confrontation go forward.

Concern about the police enforcement of social distancing guidelines in New York City has been widespread as Democratic Mayor Bill de Blasio has consistently used harsh language when vowing to break up any gathering city officials might view as a threat. Despite myriad data that shows NYC cases of the Wuhan coronavirus leveling out and hospitalizations dropping across the city and state, de Blasio has buckled down on enforcement of social distancing, citing concerns over the health of the city residents. The mayor has been skewered by voices on the left and right after a tweet last week singled out Jewish New Yorkers following a large funeral for a Rabbi who had died from COVID-19.

New York Governor Andrew Cuomo said that reopening of the state will begin on May 15, and proceed region by region. This weekend, 51 New Yorkers were issued a summons for violating social distancing guidelines. More than 1,000 officers were assigned to patrols specifically tasked with patrolling social distancing among pedestrians in the city.

From a joint public address with Mayor de Blasio, NYC police commissioner Dermot Shea said the Saturday incident was not reflective of normal police interactions across the city.

"This did start out as a social-distancing encounter — it escalated into what you see on this video with a total of three arrests made, recovery of a small amount of I believe marijuana, recovery of a Taser that was not an NYPD Taser in this encounter.”