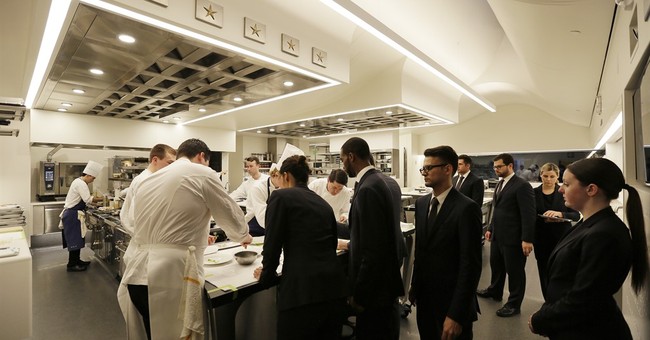 The broken restaurant industry is facing another, devastating crisis as insurance companies that are being paid to protect businesses from financial loss aren't paying out. In this unprecedented crisis, restauranteurs, lawyers, and politicians are scrambling to find a way around insurance policies that specifically exclude financial loss due to a viral pandemic.

Though the Wuhan coronavirus pandemic has been kind to almost no industry, restaurant and hospitality businesses have been hit particularly hard. While the congressional stimulus package designed to help Americans most in need set aside billions of dollars for small businesses, thousands of restaurants were unable to receive funding help when he Payroll Protection Program ran out of money last week. While Congress squabbles behind closed doors trying to "make a deal" to secure more funding, many restaurants are left out in the cold, unable to earn enough to survive or pay their employees.

Restaurants and bars, which survived primarily on paper-thin margins in the best of times, have been met with blow after blow since doors were shuttered and patrons were told to "stay home." Now turning to their insurers they paid to protect them in the event of just such a disaster, they are met with yet another stone wall.

Following the outbreak of SARS in 2003, regulators approved an exemption for disaster policies from insurance companies for bacterial infections and viral pandemics. Though some policies list pandemics in their coverage exclusion, many restaurant operators were unaware of the coverage gap. Additionally, many insurance policies do not list a pandemic exclusion and have denied insurance payouts because the Wuhan coronavirus devastation does not constitute "physical damage" to the restaurant. One restaurant executive in Atlanta was particularly frustrated that so much money paid for disaster insurance paid nothing because the new regulation.

"My frustration with insurance companies is that they’re essentially in business to take your money, make money off of your money and then never pay you out when you have an issue," said Fred Castellucci of Castellucci Restaurant Group. One U.S. congressman and several state legislators and have introduced bills that would remove pandemic exclusions from insurance policies. The president has said that insurance companies should proceed with payouts based on what is "fair."

"I would like to see the insurance companies pay if they need to pay, if it’s fair," the president said last week. "And they know what’s fair. And I know what’s fair." Trump declined to say whether he supported a repeal of the pandemic exclusion. Insurance companies pushed back against mounting pressure to remove the pandemic exception, saying that such coverage would be "uninsurable." Losses to restaurants suffered because of the Wuhan coronavirus are closing in on $500 billion. Annual premiums for those effected restaurants are less than 20 percent of that.

Celebrity chef Thomas Keller, who was recently named to Trump's wide-ranging council on restarting the United States economy, is currently suing his own restaurant insurer for refusing to pay out. Keller's policy does not have a pandemic exclusion. He described his confusion and disappointment in an op-ed penned last week.

Many of us, to protect our restaurants and our employees, invested in business interruption insurance. We recognized that if the unexpected happened and we were forced to shut down, we would have a safety net. Instead of taking as much as we could in profits, we paid premiums to insurance companies, purchasing specific coverage for civil authority shutdowns — to cover us in the case that a government entity mandated closures. Although rare, a civil authority shutdown can be devastating to a restaurant that depends upon a large, well-trained staff.

We all paid faithfully, with the expectations that we would have someone on our side. We thought we were in good hands.

But now, when restaurateurs are contacting our insurers, we’re being told that the civil authority shutdown orders are not covered. Why? They tell us that all policies exclude pandemics. We've read our policies; that is simply not true. At no time were we ever told that civil authority shutdowns from a global pandemic were excluded. The word pandemic does not appear in any of our policies. (In fact, some policies actually included additional coverage for loss due to a virus or pandemic outbreak.)

After being named to the Reopening the Country council, Keller received backlash on social media for making supportive comments of President Trump. He fired back with words of his own, instructing "haters and cynics" to "shout less, act more."

Honored @realdonaldtrump asked me & @danielboulud @wolfgangpuck @jeangeorges to join @whitehouse Great American Economic Revival Industry Group. Proud to work together towards a strategy where the safety of Americans is top of mind in conjunction towards economic revitalization.

Share this on Facebook
Tweet
Trump Finally Has His Answer on 'Where's Durham?'
Rebecca Downs
Late Night Host Has His Own Standard of What Makes for a 'Representative' Court
Rebecca Downs
It's Not Hard to See Why the FBI Didn't Care About Larry Nassar Sexually Abusing Scores of Young Women
Matt Vespa
Poll Dumps Cold Water All Over Biden's Key Promise About Afghanistan
Rebecca Downs
Liberal Law Professor: Texas Abortion Ruling Does Harm Democrats...Due to Their Overreactions
Matt Vespa
Are These Key Senators Any Closer to Voting for Spending Package?