This Celebrity Chef Promises Paella in Exchange for Social Distancing 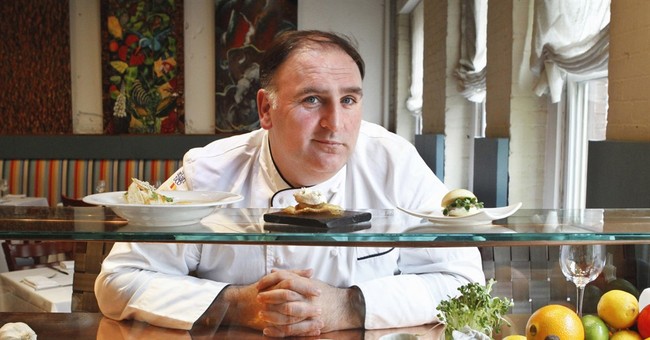 Chef Jose Andres, known for part-owning and operating popular D.C. restaurants Jaleo, Zaytina, Minibar, Oyamel, and many others, has issued a vow to feed tourists his signature Paella if they stay away from the popular Tidal Basin and blooming Japanese Cherry Blossoms.

"If we go down in visits today in a big way, Next year we will cook a huge Paella for thousands of Washingtonians to celebrate life, and our beautiful @washingtondc you got my word! @wikipaella #StayHomeCherryBlossomsChallenge," Andres said in a Sunday tweet. The tweet, which was written as a response to a fan lamenting having to miss the famed blossoms, was widely shared and praised with other fans sharing their stories of staying away from the Tidal Basin.

If we go down in visits today in a big way, Next year we will cook a huge Paella for thousands of Washingtonians to celebrate life, and our beautiful @washingtondc you got my word! @wikipaella #StayHomeCherryBlossomsChallenge https://t.co/xSIwSGiBOI

Andres, who also helms restaurants in New York, California, Nevada, Florida, and the Bahamas, has already responded to the virus outbreak by transforming many of his thriving restaurants into soup kitchens. The World Central Kitchen, a nonprofit founded by Andres in 2010 as a charity dedicated to feeding people after a natural disaster, has mobilized across the globe.

Of the work done by World Central Kitchen to get food to as many in need as possible, Andres says he and his team of culinary professionals are using their sharpest skills to help. Andres also pointed out his desire to help the displaced restaurant workers suffering staggering and sudden income loss during the pandemic.

"As cooks, this is what we can do," Andres said during an appearance on Fox News last week. "We need to remember that restaurants is more than 10% of the workforce of America." Andres and the WCK were asking for a $7 donation from anyone who was able to pay but handed out free meals to those who couldn't.

Prior to Andres' bribe of Paella and celebration in 2021, the Metrorail in D.C. had already closed two access points to the Tidal Basin in an effort to discourage swaths of tourists from visiting. On Monday, D.C. Mayor Muriel Bowser directed D.C. police and members of D.C. National Guard to greatly limit any access to the Tidal Basin, a path that is also popular with runners and cyclists.

"We love our cherry blossoms," Bowser said. "We will again enjoy them next year."

The National Park Service, which had initially recommenced that visitors to the world famous blossoms exercise safe social distancing, called for Washingtonians and tourists to steer clear of the Tidal Basin for their own safety this Saturday because it had become "increasingly difficult to maintain effective social distancing."

"Quite frankly, the crowds we saw coming out today were considerably larger than we had yesterday," said chief of communications for National Mall and Memorial Parks Mike Litterst. The Park Service on the National Mall, which monitors the public grounds surrounding the acres of museums and memorials in the heart of D.C., expressed their support of Chef Andres' plan to lure tourists away with the classic Spanish rice dish. The NPS also set up a "Bloom Cam" which is accessible for live streaming at any time showing the trees at their most beautiful.

"Enjoy the blossoms from home via the #BloomCam ... If not for the health and safety of yourself and others, DO IT FOR THE PAELLA, PEOPLE!!" an NPS tweet from Sunday said.

Enjoy the blossoms from home via the #BloomCam at https://t.co/6pjfKFLNlU. If not for the health and safety of yourself and others, DO IT FOR THE PAELLA, PEOPLE!!

Andres, who is originally from Spain, became famous after the launch of Jaleo, a Spanish small plates restaurant, in Maryland in 1993. He is often credited with bringing the idea of tapas dining to the United States and is known for his authentic Spanish cooking, including his many versions of Paella.