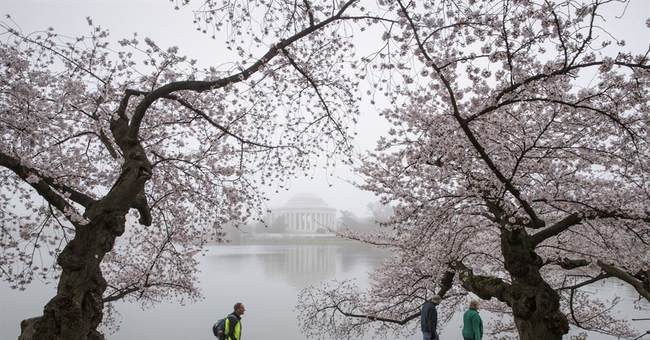 The Washington Metropolitan Area Transit Authority, which operates city buses and the Metrorail, announced on Friday that they would be shutting down service to stops with access to the popular blossoming Japanese cherry trees that line the Tidal Basin.

"Metro today announced the closures of Smithsonian and Arlington Cemetery stations, effective 5 p.m. today, to discourage the use of Metrorail for recreational visits to view the Cherry Blossoms around the Tidal Basin. Metro is open for ESSENTIAL TRIPS ONLY to maintain regional mobility for hospital staff, government officials, and emergency responders. The two stations will remain closed until further notice," said the WMATA in a brief statement.

While many residents of Washington, D.C. observe protocols related to self-isolation and social distancing, outdoor space has remained an accessible comfort for those needing some fresh air. The early spring blooming of the cherry trees against the backdrop of the Jefferson Memorial has been an iconic part of D.C. life since they were gifted to the city in 1912 by Tokyo Mayor Yukio Ozaki. Currently, more than 3,700 of the pink blossom producing trees line the Tidal Basin, visible from multiple points in D.C. and from Virginia.

Though the parade and large majority of activities related to the blossoms had already been canceled, access to the Tidal Basin, a popular path for runners, families, and cyclists throughout the year, has remained open. The National Park Service posted signs encouraging visitors to the area to continue to observe social distancing but the new closures by the WMATA will stop many area residents from accessing the picturesque walking path.

Peak bloom, when the trees are at their most stunning is estimated by botanists to begin today and last into early next week. The area is usually packed with residents and tourists hoping for time and photos with the world famous trees. In recent years, an average of 1.5 million people travel to D.C. for the Cherry Blossom Festival. The capital city, which is home to only 700,000 residents, depends on the burst of tourism for economic balance.

The National Park Service conveyed a much more optimistic approach to viewing the flowering trees just two days prior.

"Although the park is not closed, we encourage all visitors, particularly the most vulnerable, including the elderly and people with underlying conditions, to make smart decisions and to follow CDC guidance to help reduce the spread of COVID-19," a spokesperson for the NPS told the Washingtonian on Tuesday. Metro's announcement of key closures was made less than three days later.

The suspension of access points to the Tidal Basin echoes tightening restrictions elsewhere in the country like California and New York. CA Governor Gavin Newsom has issued a "stay at home" order for residents, saying that only grocery runs and medical necessity would be allowed, a measure he vowed to enforce. NY Governor Andrew Cuomo stopped short of ordering an unprecedented "shelter-in-place," but restricted most New Yorkers to stay at home outside of an emergency.

"When I talk about the most drastic action we can take, this is the most drastic action we can take,” Cuomo said during a press conference on Friday. “This is not life as usual. Accept it. Realize it and deal with it." D.C. has not been ordered to stay home at this time but many businesses such as restaurants and bars have been forced to close to dine-in customers, encouraging residents to stay home and keep a safe distance from each other.