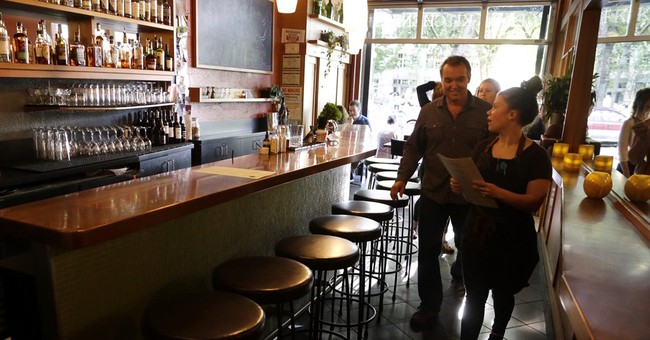 While the entire American economy hangs in the balance during the Wuhan coronavirus pandemic, there is a workforce that is particularly vulnerable to citywide shutdowns.

Workers who depend on tips from customers as a large part of their income are facing a staggering economic hardship while restaurants across the country limit their business to take out and delivery. When times are normal, working for tips provides scores of Americans with a variety of skills and talents and the opportunity to earn a competitive salary with flexible hours.

But with shuttered doors at bars, restaurants, and hotels nationwide, tens of thousands of tip-reliant employees are faced with great losses that their employers are not prepared to help with. One of the many benefits of working for tips is the mix of income from employers and customers that allows small business restaurants to operate with highly compensated staff while not having to charge an arm and a leg for food and beverage.

This system is dependent, however, on robust sales. The reality of NO sales is that the tips are gone and so are the jobs – in an instant. As the Wuhan coronavirus pandemic settled in on the United States with an immediate death blow to the economy, unprepared tipped staff were left with no time to stash extra money and brace for the fallout.

On the bright side, unlike in the past when cash was king at bars and restaurants, nearly all sales are now paid by credit card and tips are completely reported to the government, much like a typical job. This means that, yes, tipped employees qualify for the same unemployment insurance that other workers facing wage losses are experiencing. But unlike other workers, tipped employees, particularly those in major cities at high-end restaurants, are accustomed to taking home $800-$1000 per week after taxes. This money is needed to pay the rent in places like New York, Los Angeles, and Washington, D.C.­ – all cities strapped with a mandatory closure of bars and restaurants with no end in sight.

However, unemployment benefits max out at a much lower rate than that. In New York, the absolute maximum weekly payout is $504, which, at the high end, is a number few servers and bartenders would realistically qualify for. In Washington, D.C., the max is a paltry $444, once claimants are able to cut through the red tape and receive the benefit. Both amounts are a far cry from what tipped sommeliers, craft bartenders, and steak house servers are accustomed to making.

In addition to the disappointing amounts of money available through unemployment insurance, the current influx of unemployment applications leaves state and local governments in an overwhelming situation as they deal with staffing shortages of their own. The fact is tipped workers planning to make their wage through March to pay April rent are going to be in serious trouble in less than two weeks, long before they see any relief from the government.

Seeing the unique threat posed to tipped workers across the country, Sens. Marco Rubio of Florida and Susan Collins of Maine have suggested a measure that would allow bar and tavern owners to receive a loan from the small business association that would allow them to pay employees, even tipped employees, through the time of closure with six weeks of loan forgiveness.

The COVID-19 emergency response bill passed by the Senate on Wednesday, the second of its kind, guaranteed paid sick leave, increased funding for unemployment insurance, and guaranteed free testing for the Wuhan virus but did not address the huge disparity in payment for those that have suddenly lost their income. Lawmakers are currently eyeing a “third phase” for emergency funding which could include stimulus for workers beyond unemployment insurance.

Senator Lindsey Graham of South Carolina suggested strongly that the third phase could include assistance for stymied restaurant and bar employees, noting their uniquely challenging set of circumstances. Rather than a flat $1,000 payment to nearly everyone, as was suggested by several GOP members including President Trump, Graham suggested beefing up unemployment. “What we’re talking about doing is for the federal government to make up the difference between whatever your unemployment check is at the state level up to 75 percent of your income if you make $80,000,” he suggested on Wednesday.

While ideas like the senators’ is a great step in the right direction. Employees that are accustomed to making money via tips are looking at immediate problems and cannot wait for political squabbling to dictate their financial predicament. Anticipating a fallout from the vast hospitality workforces in their respective cities, both Los Angeles and New York have ordered a suspension of evictions for non-payment of rent in the near future. While this helps relieve the thought of being cast into the streets for lack of income, it’s a temporary fix.

Every week a bartender or server in L.A., D.C., or NYC doesn’t get to work they lose $700-$1,000. That money cannot be replaced in time to stop these Americans from falling into a financial hole they will never crawl out of. They will need help beyond assistance from the government that could take weeks or months to reach them and likely fall short of what is required.

Some have set up "virtual happy hours" where participants can imbibe from home while leaving a tip through a crowdfunding site for an out-of-work bartender. Some workers, and the restaurants unable to pay them, have set up ways to receive donations through pages like "Go Fund Me," to help bridge the gap. Within each affected city, groups have formed to address the problems facing tipped employees that can be found across social media and other places online, even gathering funds for potential loans.