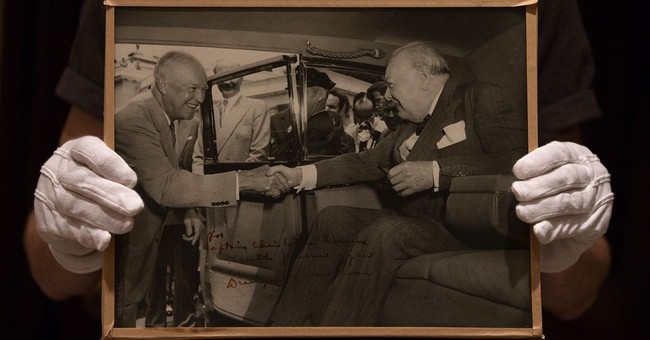 The twentieth century unleashed on the world trench warfare, Nazism, concentration camps, and nuclear weapons. But today we celebrate a turning point in world history: The day Europe was saved from Adolf Hitler.

“Today marks a historic anniversary: 70 years since the Allied victory in Europe during World War II,” President Obama said in his weekly address on Friday. “On VE Day after the Nazi surrender, people swarmed the streets of London and Paris and Moscow, and the cloud of fear that had hung for so many years finally lifted. Here at home, from small towns to Times Square, crowds gathered in celebration, singing and dancing with joy.”

“It would still be three more months of deadly fight in the Pacific,” he continued. “But for a few hours the world rejoiced in the hope of peace.”

And of course they rejoiced. Because the fighting—in at least one bloody theater of war—was finally over.

“For over five years, brutal fighting laid waste to an entire continent," he said. “Mothers, fathers, and children were murdered in concentration camps. By the time the guns fell silent in Europe, some 40 million people on the continental had lost their lives.”

“Today, we pay tribute to all who served,” he added.

The president, for his part, also spoke eloquently about what winning the war meant, and why all Americans should be humbled by—and thankful for—the Greatest Generation.

“They risked their lives, and gave their lives, so that we—and people the world over—could live free,” he said. “There were women who stepped up in unprecedented numbers, manning the home front, and—like my grandmother—building bombers on assembly lines. This was the generation that literally saved the world.”

“We will be forever grateful for what these remarkable men and women did, for the selfless grace they showed in one of our darkest hours,” he added. “But as we mark this 70th anniversary, let’s not simply commemorate history; let’s rededicate ourselves to the freedoms for which they fought.”