Shocker: Egypt's Ex-President Is Going To Prison For a Long, Long Time 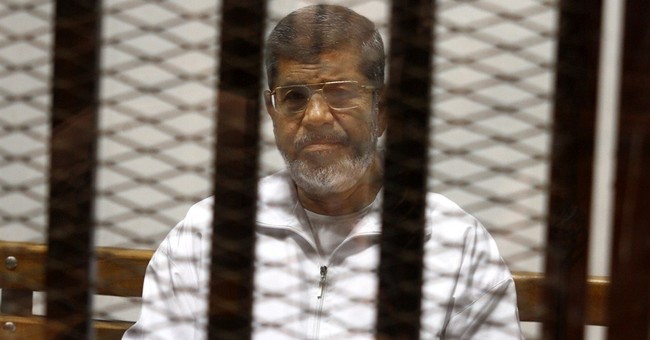 The disgraced and erstwhile Egyptian President Mohamed Morsi has been sentenced to two decades in prison for his involvement in criminal acts of violence and torture during his brief tenure as Egypt's head of state. As you may recall, Morsi was deposed two summers ago and has essentially been awaiting trial ever since.

Mohamed Morsi, the deposed president of Egypt, was sentenced to 20 years in prison by an Egyptian court on Tuesday, in the first verdict handed down in any of the criminal cases brought against him after the military ousted him in 2013.

Mr. Morsi and a dozen other defendants were convicted of inciting violence and directing illegal detentions and torture. The charges stemmed from a night of bloody street fighting between Mr. Morsi’s supporters and opponents outside the presidential palace in December 2012. All of the defendants were members of his administration or Islamists from the Muslim Brotherhood, which supported him.

Morsi and his co-defendants may have escaped the noose, but tensions have smoldered and reached unsettling heights between the government and the Muslim Brotherhood. The latter, for instance, which is now officially labeled a terrorist organization by Egypt's new regime, released this statement following the verdict (via The Guardian):

His supporters were outraged. “His trial has been a travesty of justice, which has been scripted and controlled by the government and entirely unsupported by evidence,” Amr Darrag, a senior figure from the Muslim Brotherhood and a former minister under Morsi, said in a statement in Istanbul reported by Reuters. “They want to pass a life sentence for democracy in Egypt.”

Morsi, for his part, surely maintains the proceedings are also ridiculous and illegitimate. He has said so himself, of course, as he believes he is the rightful ruler. And while the case will reportedly be appealed, his backers are already sounding off, expressing strong disapproval -- and disagreements -- with the ways in which the trial was handled:

In a statement, Amnesty International called the case flawed and full of loopholes, while describing the trial as a "sham." …

Morsi's questioning took place without his lawyers present during his detention in an undisclosed location for four months following his ouster in July 2013.

Amnesty said Morsi's legal team was only able to access case files days before the trial began. It also documented irregularities, such as where abuses of his supporters — not his opponents — were the only evidence documented. The court also ignored what Amnesty said were deaths among Morsi's supporters during the same protests.

Nevertheless, Morsi faces a slew of other charges, including “espionage” and “insulting the court.”

Small wonder, then, his legal troubles are only just beginning.