Right To Work Comes To Wisconsin 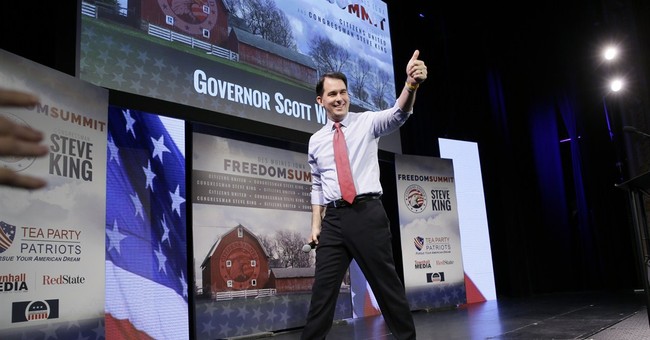 Late last week state lawmakers passed sweeping legislation paving the way for Wisconsin to become a right to work state. The New York Times brings us up to speed:

The State Assembly, which includes 63 Republicans and 36 Democrats, passed the bill 62-35, along partisan lines. Last week, the State Senate passed the bill, 17 to 15, also mainly on party lines.

As evidenced by the roll call, right to work legislation is extraordinarily polarizing and sometimes unpopular, especially in blue states. After all, few Democrats crossed the political aisle in Wisconsin to get the bill passed and demonstrators showed up in droves last week to prevent it from becoming law. Despite their protestations, however, Wisconsin Gov. Scott Walker (R-WI) made history today:

On a personal level, this is a truly astonishing accomplishment for Gov. Walker as National Review Online’s Deroy Murdock explains:

A Wisconsin RTW law would be like Democrats implementing a 25 percent state income-tax rate in Alabama. The odds are that no other Republican presidential aspirant will accomplish anything so significant anytime soon.

I agree. But equally as important (at least for the people of Wisconsin) research conducted by economist Stephen Moore and others shows that right to work laws are good for the economy and create jobs:

[Arthur] Laffer and I have conducted substantial economic research showing three times the pace of jobs gains in right-to-work states than in the states with forced union rules that predominate in deep blue states such as California, New York and Illinois.

In the 2003-2013 period, jobs were up by 8.6 percent in right-to-work states, and up only 3.7 percent in forced union states. Most of the Southern states, with the exception of Kentucky, are right-to-work.

Naturally, labor unions and their defenders would dispute these statistics and indeed already have. But their efforts are too little too late; the legislation has already been signed into law.

I'll leave you with this: As of today, exactly half of all U.S. states are now right to work:

WI became the 25th state to have a Freedom to Work law with our signing at Badger Meter in Brown Deer. pic.twitter.com/xiO1KSTJHh