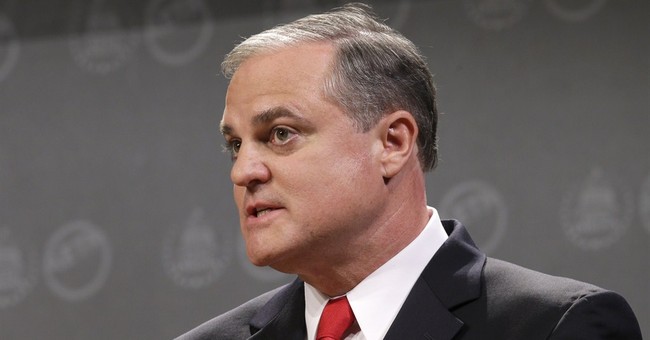 If you tuned into the first Arkansas Senate debate this week and then tried to watch this one, I wouldn’t blame you for turning it off early. What we saw tonight was essentially the same thing: the same pleasantries, the same talking points, and the same attack lines. But there was one big difference. Sen. Mark Pryor (D-AR) said something really stupid that almost certainly will dog him for the rest of the campaign.

But let’s begin on a positive note.

Generally speaking, the Sen. Pryor carried himself well. He seemed more poised, relaxed, and assertive than he was on Monday, and his opening statement was memorable. “Arkansas is written on my heart,” he said impassionedly. “You know I love this state and you know the most important thing I can do is listen. And that’s what I’ve done.” He reiterated again and again that his opponent is beholden to “out of state billionaires,” and that special interest groups are “buying” the election for him.

“They know they can count on Tom Cotton,” he intoned. “I listen to you, and he listens to the billionaires. That’s what I mean when I say Arkansas comes first.”

Among other things, he accused Cotton of voting to cut Medicare, funding for children’s hospitals, and food stamps. Not surprisingly, he again intimated he was driven more by ambition than a call to public service (although, in fairness, he didn’t accuse Cotton of being “entitled” as he did on Monday).

There was one unforgettable exchange, however, where Mark Pryor looked foolish. When asked how he would describe a typical middle class income, Sen. Pryor replied “up to $200,000.” What? When I heard him say that, I immediately thought back to Mitt Romney’s cringe-inducing, on-stage $10,000 bet with Rick Perry during one of the 2012 presidential debates. In Pryor’s case, though, he spent the first half of the night portraying himself as the only candidate in the race who understands the true concerns of ordinary Arkansans. Then he said this:

In just a few words, Pryor showed how out of touch he is. This will cost him.

On the plus side, Pryor was at his best defending his vote on the farm bill, hammering Cotton for voting to shutdown the government, and emphasizing his ties to the state. He came across as an unassuming, hard working public servant who wants to do what’s best for his constituents. He seemed earnest.

For what it’s worth, I think this debate will soon be forgotten. What will stick, however, is Pryor’s bewildering assertion that a $200,000 income is somehow “middle class.” Team Cotton is probably already writing that gaffe into an attack ad as I type this.

It would be foolish not to.