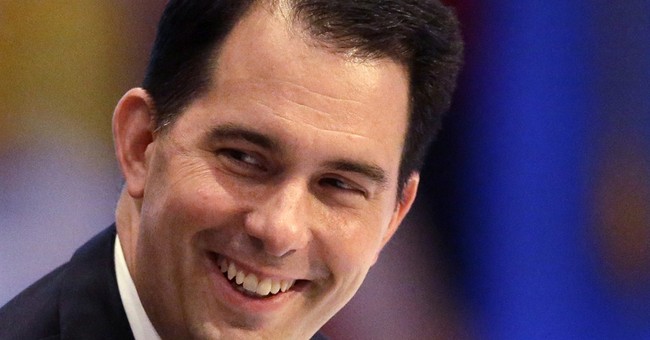 Although Gov. Scott Walker (R-WI) won his state’s gubernatorial contest in 2010, and made history by surviving a recall election two years later, Wisconsin is, in many ways, a blue state. And thus the union-busting, conservative governor now finds himself in the political fight of his life.

If he wins his re-re-election bid, however, most political observers agree: He’s on solid and fertile grounds to form an exploratory committee to run for president.

But he'll need to win at least one more election to prove he's a viable contender in 2016. So how, exactly, are his electoral prospects faring? NMB Research conducted a survey in the state’s swing districts on behalf of the American Federation for Children (more on that below). The pollsters found, among other things, that the incumbent governor is ahead, if only by a hair:

The survey of these districts also found that Wisconsin Governor Scott Walker has a one point lead over his Democratic challenger, Madison School Board member Mary Burke (47 percent to 46 percent, respectively).

And yet one issue that will almost certainly galvanize Badger State voters is education. As the Milwaukee Journal Sentinel reports, Walker has pledged to expand the state’s government-subsidized private school voucher program; his opponent, Mary Burke, wants it abolished. So perhaps Walker should feel good about where he stands on this particular issue: after all, the NMB Research poll found that education reform initiatives in the state are wildly popular:

More than six-in-ten respondents (63 percent) favor empowering parents with the right to allow the tax dollars associated with the education of their children to follow their children to the public or private school of the parents’ choice. Importantly, 62 percent of independent voters favor educational choice, while only are 30 percent are opposed.

When asked if respondents favor various educational reform proposals, the responses were equally as impressive. “Expanding Wisconsin’s statewide school choice program so that it would allow any working class Wisconsin parent to use taxpayer dollars to send their child to the public, private or religious school of their choice. The law currently only allows the poorest parents to be in the program.” (60 percent total favor, 33 percent strongly favor, only 32 percent opposed).

Public opinion is thus clearly on the governor’s side, which is one of many reasons why, I suspect, Walker is strongly in favor of reforming the state's public education system through these kinds of initiatives.