No Big Deal: Obama Hit the Links With a Bain Lobbyist 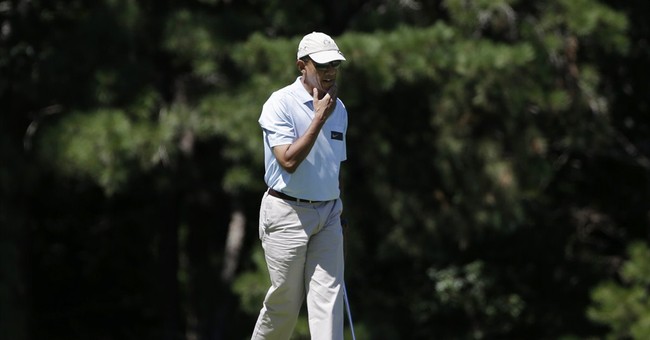 Remember when Team Obama vilified ex-Bain Capital CEO and 2012 GOP presidential nominee Mitt Romney during the last campaign cycle? They labeled him a “corporate raider” whose business practices directly contributed to the death of a steel worker’s cancer-stricken wife. Sadly, those weren't the only charges leveled against the Republican presidential hopeful -- or the company he once worked for.

So why, then, was the president recently seen chumming it up on the golf course with a lobbyist associated with that "evil" investment firm? Hmm:

One of President Barack Obama’s golf partners this weekend was a lobbyist for the financial firm Bain Capital.

According to a White House pool report, Obama hit the links on Saturday at the exclusive Robert Trent Jones Golf Club in Gainesville, Va., with Joe O’Neill, president and CEO of the lobbying and public affairs firm Public Strategies Washington.

O’Neill is a veteran Democratic lobbyist who represents clients like Bain Capital, Bristol-Myers Squibb, the Edison Electric Institute, Lockheed Martin and many others.

Politico continues : “The Obama White House has repeatedly touted its lobbying ban as a major tool in fighting corruption and influence peddling. The self-imposed ban largely keeps former registered lobbyists from working in the administration, though the administration has granted a number of waivers."

And yet hitting the links with a lobbyist is totally fine? Ah, well. Not to worry: The White House has already assured us that the president and his new buddy were simply enjoying a friendly game of golf.