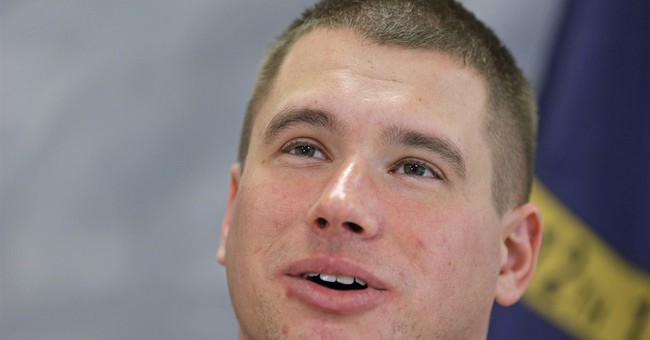 On Nov. 9, 2007, after visiting with village elders in Nuristan province, Afghanistan, White and his fellow soldiers were ambushed by enemy insurgents. After an RPG exploded near his head (knocking him unconscious), he became temporary separated from his men. Nevertheless, when he regained his senses he quickly engaged the enemy, located his team, treated the wounded and dying, and radioed for help. The choppers arrived hours later, but White refused to be rescued until everyone else was evacuated. The AP reports:

An Army account of the attack says White and his team of 14 U.S. soldiers, along with Afghan National Army soldiers, were ambushed Nov. 9, 2007, after attempting to hold a meeting with village elders in the village of Aranas in Nuristan province.

During the exchange of fire, White was knocked unconscious. When he came to, he realized that most of his fellow Americans and all of the Afghans traveling with them had slid 150 feet down a rocky cliff for cover.

Left at the top with White were platoon leader 1st Lt. Matthew C. Ferrara, Spc. Kain Schilling, Marine Sgt. Phillip A. Bocks and the group's interpreter. White set about trying to assess the condition of his fellow soldiers, running and crawling through gunfire only to find Ferrara already was dead and Bocks badly wounded. Though he tried to stop Bocks' bleeding, the Marine later died.

Suffering from concussions, White treated Schilling's injuries and used one of the unit's radios to call for help.

When a helicopter arrived after nightfall, White only allowed himself to be evacuated after the wounded were assisted.

Six Americans were killed that day. The U.S. Army tweeted out their names and ranks during the official White House ceremony.

President Obama: We remember those who gave their lives on Nov. 9, 2007. #HonorTheFallen pic.twitter.com/Vqv0dYDXlr

Specialist White made it abundantly clear that he was only accepting the award on behalf of his fallen comrades. “It wasn’t just me on that trail,” he recently said in an interview. “It’s everyone who was there. It’s their award. One of the responsibilities I feel is being a voice for those we lost, making sure their names are known and their stories are told.”
Project Veritas Exposes How the Murkowski Campaign Hopes to Rig Alaska's Senate Primary
Matt Vespa