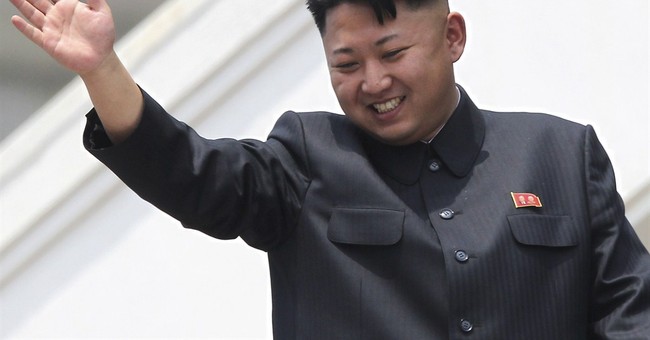 When a British salon owner and his son hung up an unflattering poster of Kim Jong Un (read: a pretty typical-looking poster of him) as a means of enticing west Londoners to get their haircut at a discounted price, they didn’t expect two shadowy bureaucrats from North Korea’s embassy to show up and demand they take it down. But that’s reportedly what happened, according to the Guardian. The emissaries from North Korea were apparently livid when they saw their dear leader looking rather foolish (as he normally does), and thus fired off a letter to Britain’s Foreign Office exhorting them to (ahem) “stop the provocation”:

"The day after it went up two Asian-looking guys wearing suits turned up. One was taking pictures and the other taking notes," said Nabbach. "I said to my client at the time, 'I think they are North Korean officials.'

"Then they came in. They asked: 'Who put that picture up?' I said I did.

He said the pair told him the poster was disrespectful and must come down. "They said: 'That is a country's national leader.' I explained to them we often used pictures of celebrities, Lady Diana, Victoria Beckham. I told them: 'Listen, this is not North Korea. This is England.'

"They asked for my name and I told them they would have to get their solicitors for that."

Nabbach said he asked them to leave, and later reported the incident to his local police station. The two did not identify themselves as being from the North Korean embassy, he said. But a Metropolitan police spokesman said: "I can confirm that the North Korean embassy have contacted us and that we are in liaison with them. Officers spoke to all parties. No offences have been disclosed."

The real injustice here would be if these hairdressers were ordered by the British government to take down the poster, and bend to the sensibilities of Kim Jong Un's breathless cronies. It would be a gross violation of free speech. And yet, the AP reports the poster has already been taken down:

We haven't had any trouble since then. If anything, the poster has become a tourist attraction," he said Tuesday - but by Wednesday afternoon the salon was shut and the poster was not visible in the window. The salon's phone rang unanswered.

Police said they had spoken to both parties and determined no crime had been committed.

Alas, Fox News reports the owners chose to take down the poster voluntarily, in part because it, er, “blocked out the light,” or something.

What a sad day for the West when we can’t publicly shame Kim Jong Un anymore without bending to (what seems to be) political pressure. After all, with a mop like that, it’s not as if some public chiding isn't well-deserved.