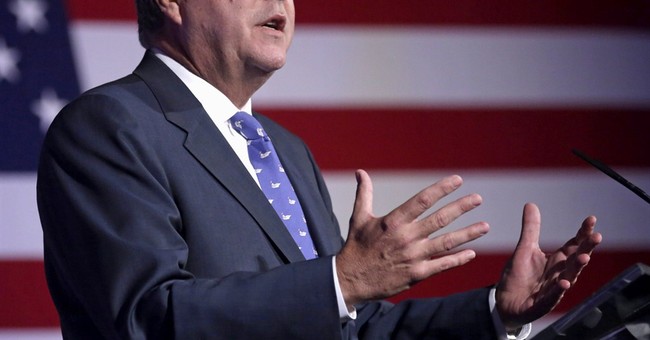 According to a new study released by the University of Virginia’s Center for Politics, authors Kyle Kondik and Larry J. Sabato posit that the new Republican presidential frontrunner -- in an admittedly crowded and ever-changing field -- is none other than George W. Bush’s younger brother, former Florida Governor Jeb Bush (R-FL).

From the report (emphasis theirs):

In our first ranking of the very large and very unsettled 2016 Republican presidential field back in April of last year, we decided to not even include the name of one of the brightest stars in the GOP universe: Jeb Bush. We just didn’t think, at the time, that the former Florida governor and brother and son of presidents was all that interested in running.

But during 2013 and into this new year, we’ve gotten the sense, like many others, that things might be changing. So much so that we now consider Bush the leader of the field if he decides to run.

Let me attempt to summarize their arguments as best I can. (For what it's worth, I know many of you are shaking your heads as you read this post. But please bear with me; their report is worth a read).

First, Governor Chris Christie’s (R-NJ) fall from grace has widened the field for a more moderate, establishment candidate to fill the void in his stead. The bridge scandal that essentially forced him to fire his top lieutenant has hurt his chances, the authors write. The Bush political operatives and insiders that wanted Christie to take up the establishment torch in 2016 are now almost certainly questioning his electability. Hence why Jeb Bush -- who, after all, is a member of the Bush dynasty -- would be an acceptable and “safe” choice to the Karl Roves of the world; they would fight tooth and nail to get him nominated.

Second, the authors explain Tea Party candidates a la Ted Cruz and Rand Paul simply don’t have the backing from prominent Republican officeholders to win the primary -- or general election, for that matter -- as easily as, say, an establishment candidate. (This, of course, isn’t to say that they can’t win, either). According to the authors, though, endorsements are huge in determining who a presidential nominee will be. To that end, non-establishment Tea Party types will find it more difficult finding endorsements, and therefore, securing the nomination. Perhaps this is why in the last two Republican presidential primary run-offs conservative candidates came up short.

Third, the GOP establishment is a crucial vote bloc and (for reasons that are not clear to me) is very enthusiastic about Jeb Bush running for president. The authors interviewed some establishment leaders and operatives, and here’s what they discovered: “In recent months, we’ve noticed an unmistakable and widespread desire among some of the Republicans we talk to, particularly ones who would be classified as members of the establishment on and off Capitol Hill, for a third Bush nominee in less than three decades. In one conversation, we mentioned several other potential candidates on our list, but the chatter kept coming back to Jeb. He was the only candidate with whom these party leaders appeared to be comfortable.”

The authors don’t rule out the possibility that Christie could recover politically -- at least enough to make him once again a serious contender in 2016 -- so Jeb’s chances of representing the establishment during the primaries is based, in part, on what happens with Christie. For now, however, the authors describe Bush as the “modest favorite” if he runs; we’ll see if he does.

Obviously, I haven’t addressed any of the reasons why Jeb Bush shouldn’t run -- and there are many. And in the end he might not. At the same time, there are many candidates I haven’t mentioned, I assume, that most Townhall readers would find more acceptable and electable than a candidate with the surname “Bush.” Still, if Jeb Bush is already being touted as a possible frontrunner by political scientists, he’s most assuredly someone to watch.

And if he goes all in, well, the race for the White House will become a whole lot more interesting.

Putin to Biden: Finlandize Ukraine, or We Will
Townhall
Actor Rainn Wilson wants to know why those who refuse the vaccine are 'angriest' that the government hasn't fixed the problem
Twitchy
Jussie Smollett's Testimony About Don Lemon Shows What a Dumpster Fire CNN Is
Redstate
RUN AWAY! Democrats Fleeing Biden's Sinking Ship
PJ Media